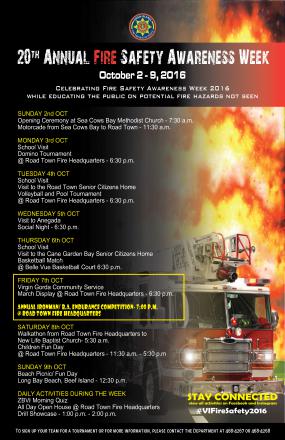 This is a historic year for the Virgin Islands Fire and Rescue Service which will celebrate the 20th Fire Safety Awareness Week and 30 years as an independent fire department.

Chief Fire Officer, Mr. Zebalon McLean said, "Due to the two milestones, the department has planned a robust and activity-filled week for the public.”

Fire Safety Awareness Week, from October 2 to October 9, is being recognised under the theme, ‘Celebrating Fire Safety Week 2016 While Educating the Public on Potential Fire Hazards Not Seen’.

Chairperson of the planning committee, Fire Officer #55 Winston Farrington Jr. said that the week has something for everyone and was planned with families in mind.

Officer Farrington said, “You can expect fun, a lot of excitement and a lot of family oriented activities. So come on out and enjoy Fire Safety Awareness Week 2016 with [us].”

The public is invited to join the fire department at the Sea Cows Bay Methodist Church from 7:30 a.m. for the official opening ceremony and motorcade at 11:30 a.m.

During the week the public can attend social nights where tournaments for dominoes, pool, basketball and volleyball will begin at 6:30 p.m. nightly.

The main event for the week is the annual Iron Man/B.A. Endurance Challenge, on October 7 from 7:00 p.m. at the Road Town Fire Headquarters and will feature other fire officers in the Territory.

“We even extended the challenge to the Beef Island fire officers, so you can anticipate a great showdown on that night,” said Mr. Farrington.

The department will be giving back to the public via community service throughout the Territory, including all three sister islands.

To that end, Mr. Farrington said, “We want to make sure that we involve everyone and that everyone gets a chance to celebrate with us because it is a special year for us.”

The Virgin Islands Fire and Rescue Service began as a unit under the Royal Virgin Islands Police Force (RVIPF) headed by the former Chief Fire Officer (CFO), Mr. Leando Stoutt. In 1986 the fire services unit separated from the police department. In 1997, CFO Stoutt also launched the inaugural Fire Safety Awareness Week, which has been celebrated every year since.

Fire Safety Awareness Week was created to bring consciousness to the public on the different ways to prevent and extinguish fires along with providing the public with sound knowledge of the Fire Service’s mandate and operations, but ultimately allowing residents to interact with fire officers within casual, entertaining settings.

For more information on the social nights or to sign up for a tournament, contact Ms. Rolicia Joseph of the Virgin Islands Fire and Rescue Service at 468-4262 or 468-4267.

The Fire and Rescue Service is committed to protecting health, life and property from the effects of fire and all other man-made and natural accidents and disasters.