70 Public Officers Honoured For Their Years Of Service 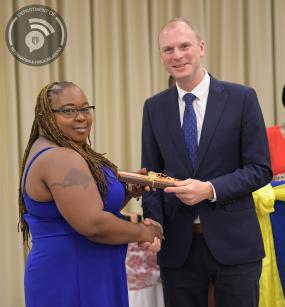 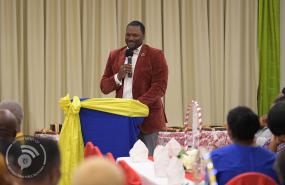 Seventy Public Officers were recognised for their years of service at a Retirees Dinner held in their honour on November 2.

His Excellency the Governor, Augustus J.U. Jaspert addressed the retirees and stated that throughout the history of the public service, each generation of employees has passed on a wealth of knowledge and achievements to those who succeeded them. He added that another generation will pass the torch and the progress made hereafter will be in part a testament to our retirees’ legacy of service.

Minister for Health and Social Development, Honourable Carvin Malone delivered remarks on behalf of Premier, Honourable Andrew Fahie and thanked the public officers for their dedicated service to the Territory.

Honourable Malone said, “Your time was well invested and is greatly appreciated by the Government of the Virgin Islands, your peers, and the public you have served. You have made your mark while you contributed to the development of this Territory through your exemplary work. It is because of your sacrifice, dedication, love, and commitment to your duties that the Public Service lives on.”

Hononourable Malone also encouraged the retirees to continue to make contributions towards the development of the public service.

He said, “…I want you also to remember to stretch your hands back and give ideas on how we can continue to develop, strengthen and transform the Public Service so that it is sustainable for generations to come.”

Meanwhile, Deputy Governor, Mr. David D. Archer Jr. encouraged the retirees to reflect on their years of service and the positive impact they have made on the Territory’s development.

“Today, we bid farewell to 70 persons who have provided service to the people of this Territory, some for 25 years and more. I ask you to take a moment to pause and reflect on your years of dedication, your contributions to the Public Service, the Government and the British Virgin Islands. Take this opportunity to consider the positive impact and contributions you have made to the benefit of this Territory.”

Acting Deputy Director of Human Resources Department, Ms. Kaisa Penn delivered remarks on behalf of Director, Mrs. Michelle Donovan-Stevens. She said, “I am certain that the organisation and individuals in your former ministries and departments have benefited from your ideas and unwritten lessons of self-determination and professional stewardship.”

Ms. Penn told the retirees that to have achieved this significant milestone would have required courageous dedication and diligence, for which the Government is grateful for the contributions, leadership and support throughout their careers.

The 2019 Retirees Dinner was hosted by His Excellency the Governor, Augustus J.U. Jaspert at Maria’s By the Sea and featured a cultural story by local author, Mrs. Ethlyn Rhymer, remarks by Deputy Governor, Mr. David D. Archer, Jr. and Keynote Address by Ms. Rochelle Smith.