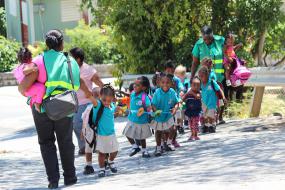 The British Virgin Islands (BVI) will join other Caribbean countries and territories in a simulation exercise to test its tsunami response plans on March 17.

The exercise, titled ‘CARIBE WAVE 16’, will provide an opportunity for the Territory to improve its tsunami warning system’s effectiveness and awareness, maintain and promote tsunami preparedness for critical entities and test contingency plans.

The BVI’s participation in this exercise is being organised by the Department of Disaster Management (DDM).   DDM’s Training Officer, Ms. Carishma Hicks said there is a need for widespread participation in this year’s exercise. She also highlighted that recent regional seismic developments reinforce the need for the community to avoid complacency.

Ms. Hicks said, “The increased seismic activity recorded at the submarine volcano Kick ’em Jenny in the Eastern Caribbean in 2015, coupled with earthquakes of varying magnitudes being recorded in Barbados, Trinidad and St. Lucia last year, reinforces the need for everyone to remain vigilant and prepare for any eventuality”.

The DDM’s Training Officer recommended that all sectors of the community including Government departments, private companies, organisations and schools register to participate in the March 17 simulation exercise which would allow them to test and fine tune their earthquake and tsunami evacuation plans.

This year’s exercise will test participants’ response and level of preparedness for a tsunami generated by an 8.5 magnitude earthquake in Venezuela at 10.08N, 66.0W.

Ms. Hicks explained, “It is a known fact that earthquakes can trigger powerful destructive Tsunami’s and although the Caribbean region has not recorded any significant occurrences in recent times, the reality is that the region is vulnerable to these hazards because of our geographical location and low lying coastlines.”

She added that individuals, organisations and communities interested in participating in the exercise are encouraged to register by contacting the DDM at 468-4200, on or before March 11.