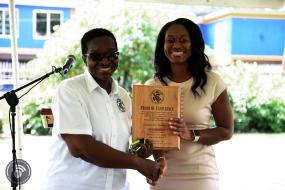 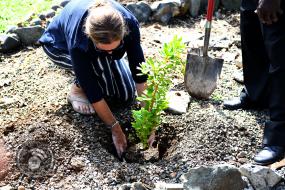 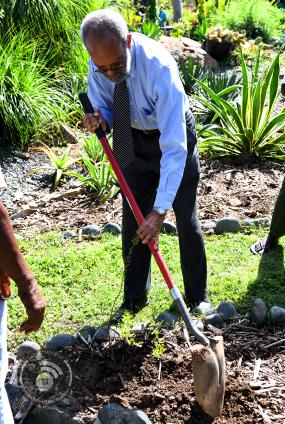 The botanic garden lost almost 90% of its large shade trees during the passage of the 2017 hurricanes but has now undergone some transformation.

Chairman of the National Parks Trust Ms. Ayana Hull said, “The garden that has such strong roots in this Territory was literally knocked completely flat in 2017 but just like us it had to struggle to get itself back together. Today it does have life and we are so very happy to see the colours here and that we can sit in the J.R. O’Neal Botanic Gardens once again.”

Permanent Secretary in the Ministry of Natural Resources and Labour, Mr. Ronald Smith-Berkeley expressed his gratitude on behalf of Minister Dr. Honourable Kedrick Pickering to the Director and staff of the Trust, and other departments including Fire and Rescue Services, Conservation and Fisheries, Survey, Agriculture and the Fishing Complex for contributing to the rebirth of the park for the tourist season.

Mr. Smith-Berkeley said, “We tend to view the essential concept of knowledge and wisdom as gifts granted to us by our forbearers and our seniors, parents, teachers and peers and in the face of emerging technology, scientific and industrial advancement there is a strong temptation to forget our roots while reaching for the skies but our roots whether they are physical, cultural, spiritual or historical sustain us in our growth.”

The Permanent Secretary added, “The roots of the garden remind us that we draw life, nourishment, stability and strength from the soil when our roots are firmly anchored and spreading. The roots of this botanic garden are on display today revealing the immensely rich history across the dynamic journey from a diverse past to today.”

Mr. Smith-Berkeley said the founder of Arbour Day in the BVI and the garden Mr. Joseph Reynold O’Neal, CBE as well as contemporaries of his day, shared the vision for what this special place would mean for the Territory and like him dedicated their passions, energies, knowledge and resources to its creation.

Mrs. Arliene T. Penn spoke on behalf of the Acting Governor, Mr. David D. Archer Jr. She said, “It has indeed been a very rewarding experience to see all the recovery works that has been accomplished here so far here at the J.R. O’Neal Botanic Garden.  This place looks amazing and considering the unprecedented weather patterns of 2017 I must say we look splendid.”

Past Chairman of the National Parks Trust and son of the late Joseph Reynold O’Neal, CBE Dr. Michael O’Neal, referred to his father’s memoir entitled, Life Notes: Reflection of a British Virgin Islander, 2004. Dr. O’Neal stated that  his father’s boyhood years in cuba and the exposure to that country’s richness of landscape and biodiversity helped to shape his appreciation of nature. He said a visit to Haiti in the 1950s may have also increased his growing awareness of the importance of forested lands and the value of trees in maintaining a balance in nature.

The Arbour Day celebration was hosted by the National Parks Trust (NPT) of the Virgin Islands under the theme “Honouring Our Roots”.

The celebration also saw entertainment by the BVI Heritage Dancers, presentation of prizes of the ZBVI Radio Trivia Quiz, presentation of plaques to the staff of the National Parks Trust and the planting of trees by families in memory of Mr. Joseph Reynold O’Neal, CBE and in honour of Honourable Ralph T. O’Neal, OBE, Mrs. Margaret Barwick, Mr. Malcom Winter and Mrs. Ingrid Whistler.