The Arvia Makes Inaugural Call To The VI 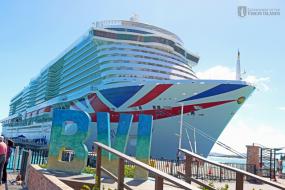 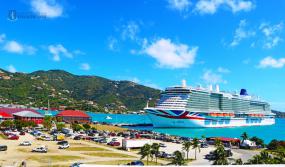 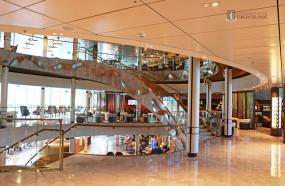 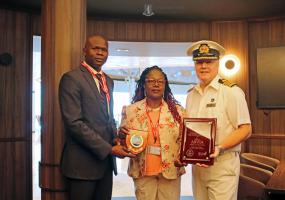 Deputy Premier and Minister for Communications and Works, Honourable Kye M. Rymer, Junior Minister for Tourism Honourable Alvera Maduro-Caines and other tourism officials welcomed the Arvia Cruise ship on its inaugural call to the Cyril B. Romney Tortola Pier Park on Monday, January 23.

Honourable Rymer who is Minister for Ports, along with Honourable Caines presented a plaque to Captain Paul Brown on behalf of the Government and people of the Virgin Islands commemorating the Arvia’s inaugural call to the Territory.

“I would like to acknowledge Island Shipping for being the agent to bring this ship to the British Virgin Islands (BVI), plus the team here, with BVI Tourist Board,” Honourable Rymer said.

He congratulated Captain Brown and officially welcomed him and his team and stated that he looks forward for increased return vessel calls to the Virgin Islands for the next few years.

“The VI now has direct flights from Miami, and we hope that you would make here a home port,” Honourable Rymer added.

Meanwhile, Captain Brown in presenting a plaque to Minister Rymer said the stop in the Virgin Islands is the ship’s first port-of-call.

“I have been coming to the Virgin Islands for about 25 years, from when there was nothing more than an anchorage and a little pier where we would tender our guests in,” the captain said.  He added, “I have seen this pier built, I have seen it extended as well as the devastation of Hurricane Irma, but I am delighted that you have rebuilt and it’s a fantastic facility now for our guests.”

Captain Brown said the Arvia is a British ship and that his guests particularly love calling at the British Virgin Islands.  He thanked the Government for hosting the crew and passengers, and gave praises on the beauty of the islands.

Hotel General Manager onboard the Arvia, Helen Kimber said that there is about 4600 guests and 1700 crew members.  “Tortola is our first stop. Additional stops before heading back to Barbados are, Antigua, St. Maarten, St. Kitts, Dominican Republic and St. Lucia,” Ms. Kimber said.

The ship joined the P&O Cruises fleet in December, 2022.  The Government of the Virgin Islands continues in its responsibility in welcoming the safe arrival of seafaring passengers as well as the reception, handling and security of cargo and sea-based trade.