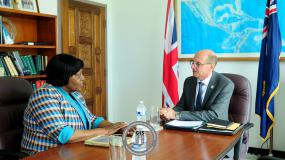 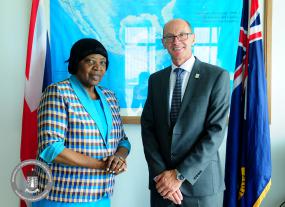 Mr. Sharman said he is honoured to take this position as Auditor General and that it is a constitutional office he fully respects and understands the obligations it brings.

The Auditor General said he will use the time of his contractual appointment to serve the people of the Virgin Islands and the House of Assembly to ensure that there is proper accountability and good governance.

Mr. Sharman said his priorities as Auditor General will be two-fold.  The first will be to get the public finance reporting up to date and that his team in the Office of the Auditor General will work closely with the Office of the Accountant General and the Financial Secretary to do so.  He described this task as an “important public reporting requirement”.

His second immediate priority is to build the capacity and capability of the Audit Office while assisting the Public Accounts Committee in its work.

The Auditor General said he will be able to serve the people of the Virgin Islands effectively in the role of Auditor General as he has held similar positions previously.

Speaking to the present realities he said, “It is going to be challenging though because one of the things we are facing is an arrears in financial reporting and we need to be able to get the audits up to date now that we have the accounts with us, and that’s going to be a big part of my work.”

Mr. Sharman came to the Virgin Islands directly after serving as the statutory Chief Auditor for St Helena, and was responsible for promoting public accountability, advising the Public Accounts Committee, and providing assurance to stakeholders on the use of taxpayer funds through the audit of the financial statements of Government and other public bodies in that Territory.

He is a Chartered Public Finance Accountant with professional membership in both the Chartered Institute of Public Finance and Accountancy, and the Chartered Accountants of Australia and New Zealand.  He has extensive experience as a statutory external auditor, having previously held director level roles with the Audit Commission and Audit New Zealand with reporting responsibilities across all major sectors, including central government and state owned enterprises, local government, health and education.

Mr. Sharman fills the post of Auditor General which was vacant since the retirement of the former appointee in September 2015.  The vacancy was followed by comprehensive recruitment rounds on three separate occasions to identify the best suited candidate.