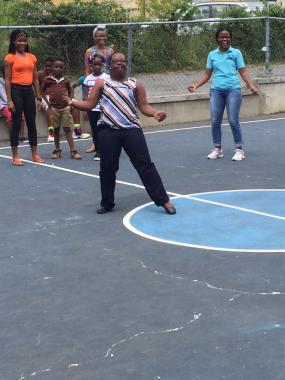 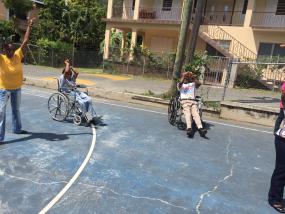 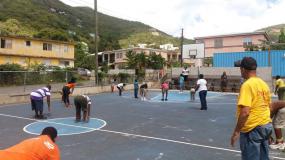 Programme Director at the Disability Services Division of the Department of Social Development, Ms. Lorna Dawson has said that her division answered the call to promote active lifestyles in observation of Physical Activity Day.

Clients from BVI Services, a day programme for adults with disabilities and participants at the Autism Centre’s Easter Camp assembled on the Lower Estate Basketball Court on April 7 for an hour of dancing in response to the challenge.

Ms. Dawson said, “Physical activity promotes a healthy lifestyle for everyone and it is important that efforts be made to engage persons with autism in some form of physical activity. Both clients and staff enjoyed the activity.  We were happy that even our participants in wheel chairs were able to participate.”

She added that children typically get their physical activity in some sort of team sport, but children with autism might have limited social skills and may not readily engage in sports, hence the need to find a way of engaging them physically so that they get the exercise that they need.

Ms. Dawson said that at BVI Services, the clients engage in at  least 30 minutes of physical activity each morning.  They also swim on Tuesdays.

She stated that research is indicating that some physical exercise programmes when implemented with other therapies, help to reduce incidents of repetitive behavior seen in some persons with autism, such as hand flapping, banging of the head, and spinning of objects.

The BVI community including schools, faith based organisations and the private and public sector were encouraged to promote active lifestyles in observation of Physical Activity Day which was observed on April 7.

The aim of World Physical Activity Day is to reduce the rate of physical inactivity and sedentary lifestyle in the general population and to promote the adoption of active lifestyles. The day’s activities also sought to raise public awareness on the epidemic of inactivity and the importance of an active lifestyle to improve health and prevent chronic non-communicable diseases.