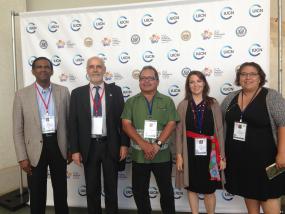 Deputy Premier and Minister for Natural Resources and Labour, Dr. the Honourable Kedrick Pickering highlighted the British Virgin Islands’ (BVI) receipt of a ‘BEST’ grant to assist in the preservation of the Great Tobago National Park while attending the World Conservation Congress in Hawaii, at the beginning of the month.

During his remarks at the BEST initiative event, Minister Pickering highlighted BEST’s significant contribution to the Virgin Islands, in the form of a grant to the National Parks Trust of the Virgin Islands towards the ongoing conservation work at the Great Tobago National Park, which is a globally recognised Key Biodiversity Area.

The grant will go towards supporting the management of Invasive Alien Species at the Great Tobago National Park, one of the most important colonies of the Magnificent Frigate Bird in the Eastern Caribbean.

The BVI delegation was invited to the World Conservation Congress by the International Union for Conservation of Nature (IUCN) and the Global Islands Partnership (GLISPA).

Regarding BVI’s relationship with GLISPA, Honourable Pickering said, “It is within the context of strong, global partnerships such as GLISPA affords, that we will further advance the agenda of Small Island Developing States, thus ensuring our survival and well-being.”

Honourable Pickering also said he was proud to lend a voice to those countries that are promoting best practices in island conservation at the local and international level. He added that by joining GLISPA the Virgin Islands recognises that the search for solutions to ensure the sustainability of our planet requires constant engagement and dialogue with the wider community of Small Island Developing States.

Honourable Pickering also attended the Global Green Islands Summit (GGIS), where experts shared their successes and experiences. Government leaders discussed agendas related to conserving the world environment and also shared their ideas on establishing an island cooperative framework for sustainable development on nature-based solutions and bright future of islands around the world.

Minister Pickering was accompanied by the Deputy Secretary for the Ministry of Natural Resources and Labour, Mr. Joseph Smith Abbott.

The delegation attended the IUCN World Conservation Congress from September 1 to 10.The Congress is the highest decision-making body of IUCN and instrumental in setting the direction of conservation efforts. It represents the largest gathering of environmental policy-makers where 6,000 delegates from around the globe, including representatives of 170 governments, leading scientists, NGOs, indigenous peoples and businesses convened to take part in the biggest networking opportunity in the environmental sector to share knowledge on how the natural environment should be managed for the continued well-being of humanity and all life on Earth.