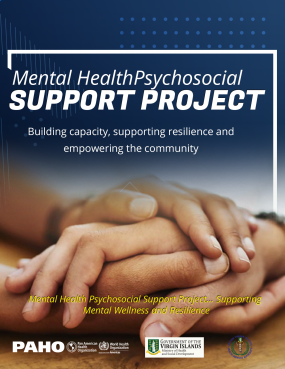 The Government of the Virgin Islands continues to invest in strengthening mental health and building community resilience of its people through the Mental Health and Psychosocial Support (MPHSS) project.

The project was launched as a result of a collaboration between the Ministry of Health and Social Development, the BVI Health Services Authority and the Pan American Health Organisation in an effort to build capacity, support resilience and empower the community to manage in the event of a disaster.

The Mental Health and Psychosocial Support Project came about after the hurricanes of 2017 to address the psychological and emotional issues that resulted from the devastation caused by the storms. In 2020 the project was re-purposed to include elements to assist persons with dealing with the COVID -19 pandemic.

Psychiatrist and Co-Coordinator of the Project, Dr. June Samuel said “The objectives of the project was to build local capacity for the delivery of MHPSS in disaster preparedness, response and management within the health sector and broader community. The project also sought to build community resilience and establish actions plans for emergency preparedness on a community level.

The campaign was executed through a series of webinars, posters, videos, social media updates, workshops, and public service announcements.  “So much work was done and assistance provided that when COVID hit we wanted to include an element to address new concerns that arose as a result,” Dr. Samuel added.

According to Dr. Samuel the project is now being re-launched to promote mental wellness and resilience “As we are winding down the project we wanted to include elements that assist individuals to improve their mental health and build resilience individually so that collectively we can be a stronger community.”

The Mental Health and Psychosocial Support Campaign will run from May 1 until June 30.  During this time the community to tune into various mediums to learn more about how they can build capacity, support resilience and become an empowered community.

The information will be disseminated through webinars, interviews, radio ads, informational flyers and social media updates.

“We invite you to listen out for our campaign deliverables on our local media as we seek to build a more resilient community,” Dr. Samuel concluded.

The Government of the Virgin Islands is committed to strengthening mental health and building community resilience.