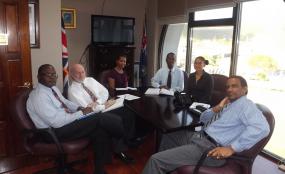 The Virgin Islands became the first Caribbean Territory and a leader amongst small island states globally in establishing the policy and financing framework needed to address the causes and impacts of climate change.

This milestone was achieved with the passage of the Climate Change Trust Fund Act 2015 in the House of Assembly Tuesday March 24.

Advisor to the Ministry of Natural Resources and Labour, George deBerdt Romilly said that international funds to address climate change issues of small islands are available, but a legal and fiduciary framework would have to be in place for any country or Territory to benefit.

He said, “Commitments of international climate change financing of US$100 billion per year from 2020 have been pledged by industrialised countries under the United Nations Framework Convention on Climate Change.”

Mr. Romilly added that the international community is not providing this climate change financing to recipient countries in the form of a blank cheque, but rather to support country-owned and country driven programmes designed to address the causes and impacts of climate change. He said the passing of the Fund in the House of Assembly will open many opportunities and is a great step out into the international arena for the BVI.

He said, “This is the culmination of years of partnership between the Virgin Islands and the Caribbean Community Climate Change Centre that started under the umbrella of the Department for International Development and supported by the project: ‘Enhancing Capacity for Adaptation to Climate Change in the UK Overseas Territories.’

Dr. Trotz added that this project resulted in a locally driven and Cabinet approved Climate Change Adaptation Policy for the BVI and the Centre looks forward to the full operationalisation of the Fund and stands ready to provide whatever support it can give to ensure its consolidation and successful operation.

Permanent Secretary within the Ministry of Natural Resources and Labour, Ronald Smith-Berkeley said the Climate Change Trust Fund Act 2015 provides a mechanism through which funding can be accessed by the private sector and civil society to fund green initiatives, environmental and sustainable programmes particularly those that manage risks from climate change and lead to a low carbon output.

Meanwhile, Deputy Premier and Minister for Natural Resources and Labour Dr. the Honourable Kedrick Pickering said the Climate Change Trust Fund Act 2015 presents a unique marketing opportunity for the Virgin Islands as an eco-tourism location and a territory that values its environment.

Minister Pickering said, “I am pleased to be one of the leaders on such a historic occasion. By meeting the international standards in the creation of the Fund, we will ensure that they are well managed, meet international fiduciary and other safeguards and that their use is transparent and accountable and directed towards achieving the goals of the United Nations Framework Convention on Climate Change.”

The Deputy Premier added, “Extensive consultation with stakeholders guided the development of the Virgin Islands Climate Change Trust Fund Act 2015, with general agreement being reached that the operations of the Fund would assist in positioning the country as one of the first low carbon tourism destinations in the region. By supporting the introduction of renewable energy and energy efficient measures, not only will the the Climate Change Trust Fund lower operational costs, but it shines an eco-friendly spotlight on our Virgin Islands in a very competitive tourism industry.”

The Government of the Virgin Islands endeavours to effectively manage and administer the Territory’s natural resources in a manner that ensures long-term sustainability.