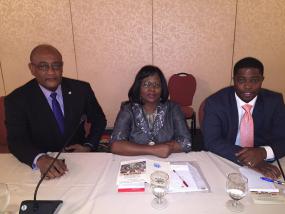 The symposium was geared towards the promotion of greater application of human rights standards in policy, law and programme formulation for children and adolescents in particular those in conflict with the law.

Minister Skelton said that the symposium was timely and in line with BVI Government’s agenda. He added that the topics discussed will allow the Territory to take the next step in creating a holistic youth justice system in addition to our current Youth Court as part of the OECS model.

Among the topics discussed were Human Rights and Governance: Making the Connection; OECS Juvenile Systems via the International Standards; Critical Issues in Child Development; Diverting Children and Adolescents from the Criminal Justice System; Crime Prevention Strategies; Visioning the Future; and ongoing Reforms in the OECS.

The symposium was supported by the United Nations Children's Fund (UNICEF) and took place on November 10 to 11.