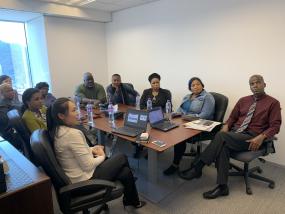 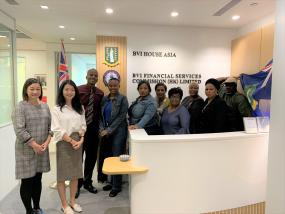 On December 2, BVI House Asia hosted an in-house visit by the BVI’s Mrs. Globe International Pageant delegation, led by former Mrs. BVI Globe Alicia Green now BVI Director, as they transited to mainland China through the city of Hong Kong to attend the competition. Mrs. British Virgin Islands, Shondrea N. Turnbull, is representing the BVI in the 2019 edition of the Mrs. Globe International Pageant (November 29-December 7), hosted by the Southern Chinese tech-city of Shenzhen. The delegation, comprised of friends, family, and government officials travelled to China in support of Shondrea’s bid for the crown.

The delegation was welcomed by BVIHA Operations Manager Ms. Obie Lo, and treated to presentations by Director, Dr. Ricardo Wheatley, and Marketing Executive, Ms. Cloudia Wu.  Dr. Wheatley gave a brief overview of the role and functions of the BVI’s Hong Kong Office, highlighting its importance within the Asia-Pacific region.  Ms. Wu then explained key aspects of BVI House Asia’s 2020 marketing strategy, inclusive of pursuing closer working relationships with the industry through partnering with the private sector in the exploration of new markets for BVI financial services products in Central China and South East Asia. In addition to BVI House Asia, Ms. Connie Chan (Administrative Officer), made a presentation on behalf of the neighboring BVI Financial Services Commission Asia office. Ms. Chan detailed the role, function, and services offered by the FSC in Hong Kong’s Financial Services sector.

Mrs. Alicia Green stated that the delegates were pleased to learn more about the roles BVI House Asia and FSC Asia play in the Asian market. “The seemingly long distance between Hong Kong and the BVI was actually not that far in practical terms given the great value the Asian market has brought to the Territory.” One of the delegates, a business woman, stated that she never understood why government was paying to have an office in Hong Kong but after the presentations, have an appreciation for the office, what it does and value for the BVI.

BVI House Asia thereafter sponsored a luncheon for the delegates, after which they transitioned to Shenzhen for the start of pageant activities.