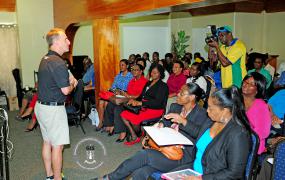 Officials from the Ministry of Education and Culture are moving towards introducing Physical Literacy in Virgin Islands’ schools.

Physical Literacy is the development of a ‘movement vocabulary’ of fundamental movement and sport skills.

At a meeting on October 14, representatives of the National Long Term Athletic Development (LTAD) and Physical Literacy Committee discussed the way forward in integrating Physical Literacy in the Territory’s curriculum.

Mrs. George also said, “The ministry [of Education] will work with the other stakeholders to ensure that the school aspect of the programme is supported.”

The Virgin Islands is one of six Caribbean territories that have been selected by Caribbean Association of National Olympic Committees (CANOC) to benefit from the Canadian Sport for Life (CS4L) Programme.

Regarding physical literacy, Mr. Joseph said, “It’s about getting individuals to recognise movement is essential to development,” adding, “The drive that is [happening] globally, is really to make [physical literacy] consistent with the fundamentals of education.”

Mr. Joseph said that there was not an informed approach to understanding the fundamentals of movement until now, and asserted that physical literacy as one of the key development pillars for children, along with literacy and numeracy.

The coordinator also noted that the best time to introduce the fundamentals of movement is from infancy to age five.

BVI National Coordinator for LTAD and Physical Literacy, Mrs. Angeleta Bernard told meeting attendees that she was very pleased with the outcome of the Physical Literacy Workshop that took place last month.

Mrs. Bernard reported that there were 83 participants, and seven new physical literacy projects emerged as a result of the workshop.

The Physical Literacy Workshop provided training for both Physical Education and Liaison teachers, as part of the healthy School Intervention Programme.

The Ministry of Education and Culture is committed to ‘Creating a Culture of Excellence’ through the promotion of healthy nutrition, physical activity and overall well-being in students.