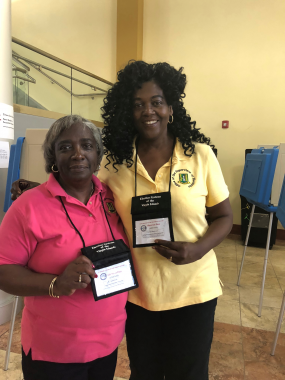 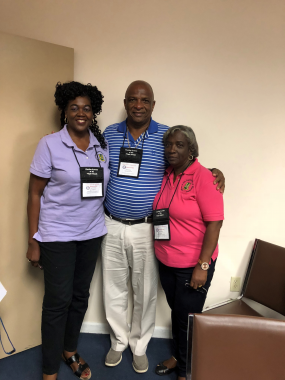 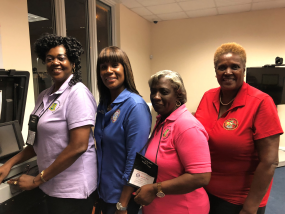 In an ongoing effort to plan for an enhanced 2019 General Elections, Acting Permanent Secretary in the Deputy Governor’s Office, Mrs.  Carolyn Stoutt- Igwe and Supervisor of Elections, Ms. Juliette Penn observed the USVI Primary Elections in St. Thomas on August 4.

Observations commenced on August 3 at the Office of the Supervisor of Elections where the BVI officials toured the Elections Headquarters and received demonstrations on the various machines used for elections. Additionally, they observed the handing over of elections material from the Deputy Supervisor of Elections, Ms. Kevermay Douglas, to one of the judges in preparation for Saturday’s poll.

On Polling Day, the BVI officials observed the proceedings utilising the DS200 Precinct Scanner and Tabulator at the three polling stations, the Lockhart Elementary School, the UVI Sports Complex and the Turnbull Library. The day ended at Elections Headquarters to observe the return of elections materials, the tabulating and reporting of the results.

During the first visit, Mr. Wesley demonstrated the use of the tabulator to the staff of the Elections Office and senior officials in the Deputy Governor’s Office. On his second visit he demonstrated the use of the DS 200 as well as the AutoMark machine to Members of the House of Assembly. During the latter visit, members were able to cast votes and obtain the results within a few minutes of the close of the poll.

Commenting on the Primary Elections, Mrs. Stoutt-Igwe said that it was an enlightening experience. “We observed areas in which we can improve our processes, including the e-poll books, for which we will now be making enquiries with ESS”.

She said that with the utilisation of the tabulators, the polls closed at 7:00 p.m. and the results were known by 9:00 p.m. Had it not been for the time taken to transport elections materials at the end of the polls, the results could have been released earlier.

Mrs. Stoutt-Igwe further stated, “This is the level of efficiency that we are expecting for our next General Elections. We are therefore looking forward to Cabinet’s approval of the proposal when submitted and the House of Assembly’s subsequent approval of the relevant amendments to the Act.

Mrs. Stoutt-Igwe expressed sincere appreciation to Ms. Fawkes for the invitation and to her Deputy, Ms. Kevermay Douglas and Board Member, Ms. Lydia Hendricks for their hospitality during the visit.

Meanwhile, Supervisor of Elections, Juliette Penn commented that the experience was great. “It showed the many ways that the elections process can be more efficient, in particular with producing the results in a timelier manner. With the use of the machines, the long lines can also be minimised.”

The Office of the Supervisor of Elections provides with integrity general direction and supervision over the registration of voters; imparts efficient, reliable and courteous service to the General Public and is responsible for the administrative conduct of free and fair elections in the Virgin Islands.