BVI To Participate In Regional Simulation Exercise On March 25 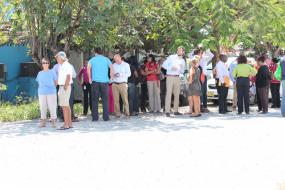 The British Virgin Islands will join several other countries and territories in testing their tsunami readiness during the simulation exercise, Caribe Wave/Lantex 2015, scheduled for Wednesday, March 25.

The exercise is geared towards improving tsunami preparedness efforts in the Caribbean and adjacent regions, including U.S. and Canadian Gulf as well as the east coasts. The Department of Disaster Management (DDM) is coordinating BVI’s participation in the exercise.

DDM’s Training Officer, Ms. Carishma Hicks, is encouraging widespread participation in this year’s exercise.  “We are strongly encouraging the entire population to utilize this opportunity to test their earthquake and tsunami plans or procedures. This year’s scenario simulates a magnitude 8.5 earthquake located just north of Panama in the southwest Caribbean Sea”.

The North Panama Deformed Belt has been the cause of several earthquakes that have generated tsunamis in the Caribbean.  The tectonic complexity of this belt can trigger motion in two separate faults lines, the frontal thrust component and the strike-slip motion, which according to scientific models can have significant impact on the entire Caribbean basin.

According to the DDM Training Officer, the national simulation exercise also presents an opportunity to evaluate the recently approved Mass Facility Plan, operational readiness of the National Emergency Alert and Broadcast System and the response from the national search and rescue team.

In May 2014, the BVI received tsunami ready recognition from the United States National Weather service. This Tsunami Ready programme seeks to ensure that countries which are vulnerable, undertake measures to reduce the potential for disastrous consequences in the wake of a tsunami.  Testing of the BVI’s tsunami readiness takes on even more significance when considered against the backdrop of predictions of very large magnitude earthquakes that could affect the region.

Persons wishing to participate in this exercise should contact the DDM at 468-4200 for registration and guidelines. Caribe Wave/Lantex 2015 is sponsored by the United States National Oceanic and Atmospheric Administration and the United States National Tsunami Hazard Mitigation Programme, which is a partnership of 29 states and territories and three federal agencies.