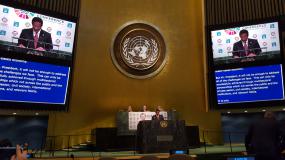 Deputy Premier and Minister for Natural Resources and Labour, Dr. the Honourable Kedrick D. Pickering has welcomed the commitment to provide the BVI with technical assistance for the implementation of the Sustainable Development Goal (SDG) 14.

Honourable Pickering said in an address at a the United Nations (UN)  High-Level Ocean Conference held on June 9, that the Government of the BVI supports the implementation of SDG 14 and is grateful for the commitment made by the Economic Commission for Latin America and the Caribbean to provide assistance.

The Deputy Premier who is the minister responsible for the marine environment and fisheries said,“As a microstate surrounded by water, I can truly say that the sea means everything to us.  It is a source of food, culture, livelihood, health, and more especially, our well-being. The sea also serves as inspiration, transportation and a driver of economic activity. We have an intimate relationship with the sea that is at the heart of our development and identity as a people.”

The Honourable Minister added, “I am pleased to report that the United Nations at the regional level has been responsive to the needs of microstates such as the British Virgin Islands. The Economic Commission for Latin America and the Caribbean has selected us as one of the first round of countries in the region to receive technical assistance for the implementation of the Sustainable Development Goals.”

Honourable Pickering called on the United Nations to provide greater support from across its various agencies to Overseas Countries and Territories (OCTs) that are Associate Members of the regional commissions.

“Not only should there be support from the regional commissions for their Associate Members, but technical assistance should be afforded from across the United Nations system where it is possible, in order to ensure that a true opportunity is given to all to implement the 17 SDGs, which are universal aspirations,” he added.

The Deputy Premier made an official statement on behalf of the BVI at the Ocean Conference’s Partnership Dialogue on Making Fisheries Sustainable on June 7, and he also voiced his views at a number of side-events in relation to Small Island Developing States (SIDS).

Honourable Pickering said the Territory’s participation at the Oceans conference was the culmination of sustained engagement with the United Nations at regional and international levels over the past five years.

He said where it concerns international issues such as marine sustainability, climate change and biodiversity that directly affect the Territory as a Small Island Developing State, it is critical that the BVI is present at the relevant international forums and that its voice is heard, particularly as the UN consider solutions to a number of the challenges that the Territory faces.

The Deputy Premier was accompanied by BVI’s London Office Director, Mr. Benito Wheatley whom he described as an exceptional diplomat whose skills have enabled the Territory to have greater representation and participation in the UN system.