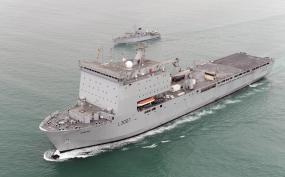 The RFA LYME BAY arrived in the Territory earlier this week as part of a Caribbean familiarisation trip for the 2015 Atlantic Hurricane Season.

Captain Minter said, “I think the Disaster Management organisation on the island is fairly well advanced and we now have a better understanding of your facilities; what you have now, but realistically, what you would need in the event that an incident happened.”

The captain said that the RFA LYME BAY has the capacity to offer transport, generators, earth moving equipment, two field ambulances and hospitality facilities on board and can transport a maximum of 1,500 persons in the event of an emergency.  It also has the ability to produce clean, fresh drinking water and make eight tons more water per day than what can be consumed, onboard.

The ship’s officers also participated in a search and rescue exercise on Anegada as part of the visit. They welcomed groups from various schools, associations and the Youth Empowerment Programme (YEP) onboard for tours.  In addition the ship’s company assisted in a community project.

As part of the visit to the Territory, Captain Minter paid courtesy calls on His Excellency the Governor, Mr. John S. Duncan, OBE, Premier of the Virgin Islands, Dr. the Honourable D. Orlando Smith, OBE, Commissioner of Police, Mr. David Morris and Director of Disaster Management, Ms. Sharleen DaBreo. He thanked all persons on the island for the wonderful hospitality and support received during the visit.

The captain and his team are visiting as many Caribbean Overseas Territories as possible early in the 2015 hurricane season. The ship left the United Kingdom in June and will return in December. The Virgin Islands was the fourth stop as the team visited Bermuda, Grand Cayman and Anguilla before arriving in the Territory.  The ship departed for the Turks and Caicos Islands on July 29.

The RFA Lyme Bay is currently on duty as part of the Royal Navy’s Atlantic Patrol Task (North). Her primary role is to provide support to the United Kingdom Overseas Territories to reinforce the UK Government’s commitment to the region.