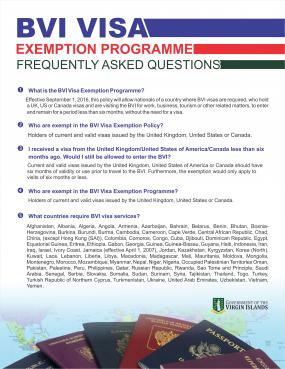 Cabinet has approved the implementation of the British Virgin Islands (BVI) Visa Exemption Programme that will go into effect from Thursday, September 1.

The programme will allow nationals of a country that require a BVI visa, but who also hold a United Kingdom (UK), United States of America (USA) or Canadian visa, and are visiting the Territory for business, tourism and other related matters, to enter and remain for a period less than six months.  Please note that ‘work’ has been excluded as a reason to enter and remain in the Territory under this exemption programme.

Premier and Minister of Finance, Dr. the Honourable D. Orlando Smith, OBE said “My Government believes that the implementation of our visa exemption programme will also help tremendously with our global marketability in tourism and in the financial services sector. Given recent advancements in trade, investment, tourism and financial services in the region, and with Britain’s exit from the European Union, it is in the Territory’s best interest to lift certain visa restrictions as needed in order to facilitate further economic growth in the British Virgin Islands.”

Premier Smith added that it is a well-known fact that the UK, USA and Canada already have a strong system for issuing visas. Therefore, nationals of a country that would typically require a BVI visa or a visa-waiver to enter the Territory, once they hold a current and valid visa issued by the United Kingdom, United States of America or Canada, can travel to the BVI.

However, the UK, USA or Canadian visas should have more than six months of validity before travel to the Territory, and would only apply to visits of six months or less. However, there are still a large number of countries requiring visas.

The Government of the Virgin Islands envisions that the next stage of its visa processes will be the implementation of an e-Visa regime to further streamline entry and facilitate economic growth for the Territory.