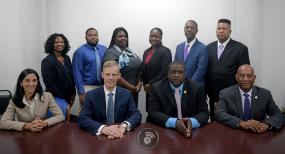 The Government of the Virgin Islands has signed a five year contract with Canadian Bank Note Company to monitor the Territory’s borders for the next five years and share real time information between agencies.

Minister for Natural Resources, Labour and Immigration Honourable Vincent Wheatley said, “I am happy to be the beneficiary of all the hard work that went into getting us where we are right now. This system will go a long way into helping us take Immigration under control. The idea of shared information in real-time is unbelievable, this is going to be the first time in many years where we can share information between agencies so this will speed up times at our ports. I think this project is very important for Immigration and for the country as it stands.”

Premier Fahie added the system increases efficiency and effectiveness in the way the Territory does business which will mean less negatives and more positives with persons that come into the Territory. “This is not just moving the BVI on the cutting edge, but it is actually putting it on the bleeding edge. I thank the representatives from the Canadian Bank Note for meeting our standards and criteria as well as our needs,” the Premier said.

Mr. Houlton said, “As the largest border control solution provider in CARICOM, we are very proud of the work that we have done with your neighbours and the technology that we are bringing to you is indeed bleeding edge. We pledge that we will implement this system and we will make it efficient for you and your teams to perform your functions.”

The company will also be employing persons on the ground which will also help with diagnostics and capacity building within the Territory. This initiative is in its early stages, and will allow for seamless information sharing and statistics gathering as it progresses. Information will also be shares on cargo entering and exiting the Territory.