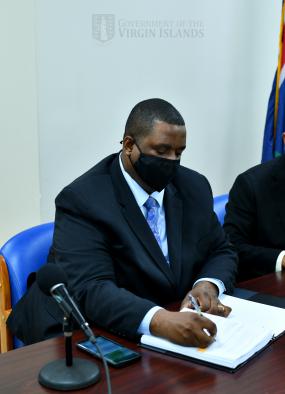 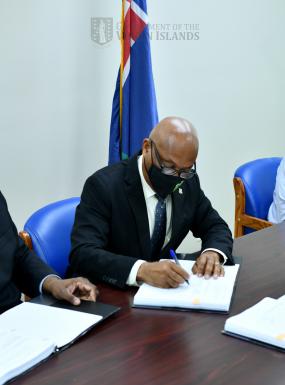 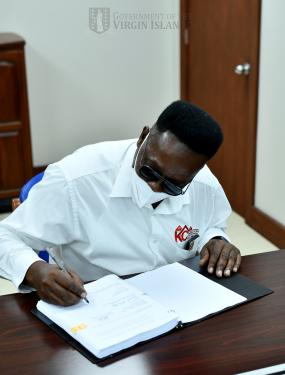 The Government of the Virgin Islands has entered into an agreement and signed a contract for the construction of restroom facilities for Brewer’s Bay Beach with K&C Construction.

The Contract Signing Ceremony was held today at the Premier’s Office in Cutlass Tower. After a successful tender process, K & C Construction was awarded the contract valued at one hundred and twenty-four thousand, two thousand and fifty-eight dollars and seventy cents ($124,258.70 USD). Works on the restroom facilities at the Brewer’s Bay Beach will commence on March 1, and continue for a six-month period until August 31.

Minister of Natural Resources, Labour and Immigration Honourable Vincent Wheatley opened with remarks giving a brief background of the facilities built during his tenure in office and followed with thanking everyone who made the new achievement possible. He said, “As the BVI continues to be a premiere tourist destination, it is ever so important that we facilitate these persons who visit our shores. It has been our aim for many years to ensure that those popular beaches have bathrooms.”

Minister Wheatley added, “When we got in we first started with the Long Bay bathroom at Beef Island, and that has since been serving the community as well as the visitors very well. We will try to do this at all our premiere beaches throughout the BVI, we have done the Baths many years ago, we still have to do Spring Bay, Savannah Bay, and all of our other popular beaches.”

Member of Her Majesty’s Loyal Opposition and Second District Representative Honourable Melvin Turnbull extended gratitude on behalf of his constituents and himself to the Government of the Virgin Islands for executing the project that has been in the budget since 2016. He said, “I’m happy that the Minister of Natural Resources and Labour has met with the people in the community of Brewer’s Bay about three or four times since being elected. I am also going to extend my gratitude on behalf of those residents to the Premier and Minister of Finance for ensuring that the funding not only was put in the budget but now the contracts are signed. I want to say to the residents of that community that delay does not mean denial, but we are moving towards having a restroom facility for the residents and visitors alike.”

Mr. Kendol Arthur of K&C Construction also thanked the Government of the Virgin Islands for awarding his company with the contract. He also gave his assurance that his company will execute the works to the best of their ability as they normally do. He said, “We at K&C are very proud to get this job by Brewer’s Bay. I want to thank Honourable Turnbull and Honourable Wheatley for their kind words, and I want to thank the Government of the Virgin Islands for trying to see this small company through. We are going to make Brewer’s Bay bathroom one of the best bathrooms in the BVI.”

Following the signing of the contracts, Premier and Minister of Finance, Honourable Andrew A. Fahie closed with remarks stating how pleased he was that the contracts have now been signed on the project. He said, “I am pleased that your Government continues to ensure that despite the challenges of the Covid-19 pandemic, which is the worst pandemic in the last one hundred years that is still ongoing, with limited resources as a result of that; but still yet high demands of Government facilities and overall of the country, your Government continues to meet the needs of the people of the Virgin Islands and ensure that no district is left behind.”

He added, “We are pleased that all the members of the Government have sanctioned this project. I am pleased to know that the Representative of the Second District can state that he is also pleased that we have made sure that it is done. We intend to make sure that we continue to promote what’s best for this Virgin Islands no matter what district area it is. I want to say congratulations to K&C Construction and I want for the record to state that he has won this through a fair and open tender process.”

The full video of the Contract Signing Ceremony for Restroom Facilities at Brewer’s Bay Beach can be viewed on the Government’s Facebook page at BVIGovernment.