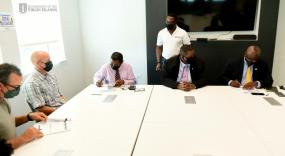 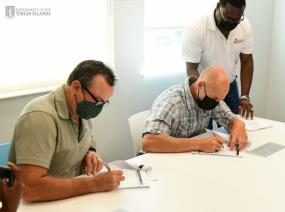 The Recovery and Development Agency (RDA) has awarded a contract to Amandla Engineering to supply and install a Solar Facility at the Jost Van Dyke Clinic as it marches towards a Green Recovery.

Acting RDA Chief Executive Officer, Mr. Anthony McMaster signed the contract with Sean Hartley of Amandla Engineering valued at $65,500.00 on March 26. Works are scheduled to be completed in 17 weeks at the end of July 2021.

The project is funded by the UK Foreign, Commonwealth and Development Office.  His Excellency the Governor John James Rankin, CMG in an invited comment said that he was delighted that the UK is funding the solar panelling for Jost Van Dyke clinic.

“This will enable the clinic and wider community to be more resilient in times of natural disaster, as well as help reduce carbon emissions and so tackle climate change, to which these Virgin Islands are so vulnerable,” the Governor said.

Governor Rankin added, “This project is a wonderful example of the Governor’s Office working in partnership with the Health Service Authority, the Ministry of Health and Social Development, RDA and local contractors. As the UK prepares to host the United Nations’ Climate Change Conference, COP26, later this year, we will actively look to identify more green projects to support.”

Premier and Minister of Finance Honourable Andrew A. Fahie thanked the Foreign, Commonwealth and Development Office for its sponsorship and for joining the Government of the Virgin Islands’ vision for going green.

Premier Fahie acknowledged the work of the CEO of the RDA for what he has accomplished with his team including the roll out and execution of a number of majority priority projects.  ‘Going Green’, he said, is a priority of his Government and is important for energy and cost efficiency and in respect and care of the environment.

The Premier shared that Government has amended its legislative policies to allow for the selling back to the grid and in the future a legislative amendment will be introduced to allow for the duty-free importation of renewable energy projects and systems for a specific timeframe. This he added will allow persons to “Go Green” and will drive ‘Green Energy’.

Minister for Health and Social Development Honourable Carvin Malone said that the storms of 2017 and the pandemic offers opportunities for the Territory too look at the voids and have them bridged. He said there is no better time than now to move forward with the project.

“Whether it is after a storm, or during or after a pandemic the clinic must function, so this is a fitting project for a fitting discipline,’ the Health Minister stated.

Meanwhile, Second District Representative Honourable Melvin ‘Mitch’ Turnbull thanked the RDA, and Premier Fahie as the minister with responsibility for recovery, for his commitment to ensuring the clinic in Jost Van Dyke is receiving the necessary attention and will be going Green.

Honourable Turnbull said, “I am grateful for what is going to be done.  It is absolutely important to where we are in the Territory and will be a tremendous effort for all that we want to do in the future. As much as we can, we should use solar power and the energy around us to take us off the grid system.”

The Second District Representative added that he was grateful on behalf of the people of the Second District, specifically the Jost Van Dyke community, for the project to be taken on and signed.

Contractor, Sean Hartley also expressed gratitude for the opportunity and remarked that it was exciting that Amandla Engineering was getting the opportunity to complete the projects.

The supply and installation of the solar facility at the Jost Van Dyke clinic is the third of three solar energy projects funded by UK Foreign, Commonwealth and Development Office and implemented by the RDA. It will provide 10KWp (DC) solar system at the clinic, which will include the construction of a stainless-steel parking port at the facility with additional solar panels complementing those on the roof of the clinic.

This project will contribute to further promoting renewable energy in the BVI and massively reduce the energy bills for this important community facility. It will also ensure an alternative reliable power source in the event of future disasters.