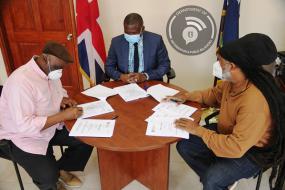 Minister for Transportation, Works and Utilities, Honourable Kye Rymer witnessed today the contract signing by contractors for works to begin on the additional third lane project in the Traffic Enhancement and Improvement Programme within the city of Road Town.

This is following the statement made by Premier and Minister of Finance, Honourable Andrew A. Fahie on May 28 in which he stated that the Government’s ongoing economic response to the COVID-19 pandemic includes the promise to fix the traffic congestion in the capital city Road Town, Tortola.

Honourable Rymer said, “The project will extend from the junction at Administration Drive to the cross walk at the Ferry Terminal adjacent to the Taxi Stand.”  The total value of the project is two hundred and three thousand, sixty nine dollars and forty three cents ($203,069.43).

The public is advised that the works are anticipated to commence in early June 2020, and caution should be exercised while traversing this area.

A final traffic turnaround simulation is scheduled for Monday, June 1 beginning at 10:00 a.m. The motoring public is encouraged to participate in the exercise by driving into Road Town and following the road markings and signage for the proposed changes.

The Government of the Virgin Islands is now in Phase Two of the ongoing economic response to the COVID-19 pandemic.