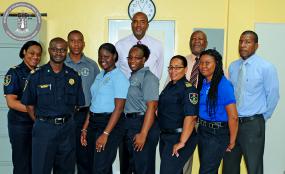 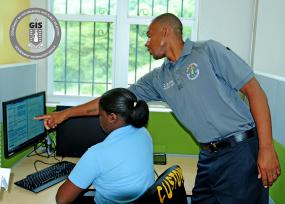 Effective today, all trader declarations will be completed and submitted online through the Customs Automated Processing System (CAPS) as Her Majesty’s Customs moves towards full automation.

Deputy Financial Secretary, Mr. Wendel Gaskin expressed how proud he was of the Department’s initiative and its state of the art facility.

Commissioner Smith said a diagnostic study of the Customs Reform and Modernisation Programme was conducted in 2000 and one of the main objectives was to modernise and streamline the business processes of Customs utilising a system tailor-made specifically to utilise the laws of the Virgin Islands while meeting the demands of all stakeholders in the trade environment.

He said, “Our aim is to collect accurate trade data, reduce the amount of time spent at a Customs port, expedite the clearance process of goods, efficiency in data mining for our stakeholders and risk profiling of non-compliant importers.”

“Additionally, knowing who importers of certain commodities are in the event of a product recall, having officers spend more time conducting inspections and less time doing clerical duties, utilising the International Commodity Coding System or Harmonized System, improving compliance and efficiency, and increasing revenue collection are a few areas in which the system is addressing,” Mr. Smith added.

Commissioner Smith said that though the system was developed between 2007 and 2008, it could not be utilised until the enactment of the Customs Management and Duties Act No. 6 of 2010, which provided the law that gave the legal framework for the utilisation of the Harmonized System, which is the foundation and basis for CAPS.

He said, “After many years of challenges, we are finally here with everything to give the Lord thanks for. This new system improves the collection of data on Customs declarations, and eliminates the need for officers to manually input data, saving much needed time.”

All importers are required to register with the Customs Department to obtain a Trader Identification Number or to gain CAPS access as stations throughout the Territory will no longer be accepting manual or paper trader declarations effective today.

Once registered, brokers and agents will be issued a Trader Identification Number and access to the web account.

Persons requiring CAPS web submissions application training or requiring a CAPS registration form should visit the headquarters of the Customs Declaration Centre located on the third floor of the Qwomar Building or contact CAPS desk via email at caps@gov.vg or telephone at 468-5705.