Customs Duties On Imports Reduced To 5 Percent For 3 Months 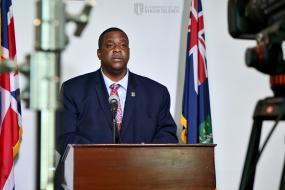 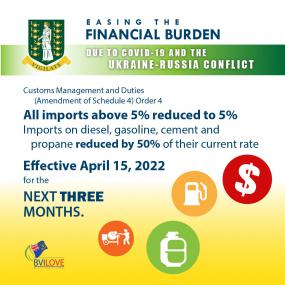 Premier and Minister of Finance Honourable Andrew A. Fahie has announced that all customs duties on imports that are above five percent (5%) will be reduced to five percent (5%) effective April 15 for three months in the first instance as the Government of the Virgin Islands makes the relevant adjustments to provide relief to the people of the Territory.

The Premier said goods and services that are currently at 5 percent and less would remain the same. The policy he said will apply to businesses as well as private citizens.

Citing an example, the Premier said a person who imports a motor vehicle costing $30,000 dollars including shipping, would pay regular import duty of twenty percent (20%) or $6,000 dollars. He said under this initiative, the duty will be capped at 5% and they would pay the reduced duty of only $1500 during the period of the stimulus initiative. “This would be a $4500 savings on that one purchase,” the Premier said.

Honourable Fahie further added that persons and businesses will now only pay 5% when it comes to the importation of food, clothing, construction materials, marine supplies and equivalent, vehicles parts, products for senior citizens and all other items including the tourism industry, where the regular customs duty is over 5%. This, he said, will lower the overall cost of importing these items.

The Premier said Cabinet approved the reductions on April 13 and that he is confident that all legislators in the House of Assembly will support the measures that will give the people of the Virgin Islands some relief.

Residents are also invited to take advantage of the zero import duty on most of the equipment and supplies needed for Going Green and switching to sustainable energy sources such as solar.

Persons can contact Her Majesty’s Customs at (284) 468-6800 with questions related to the tax reduction initiative.