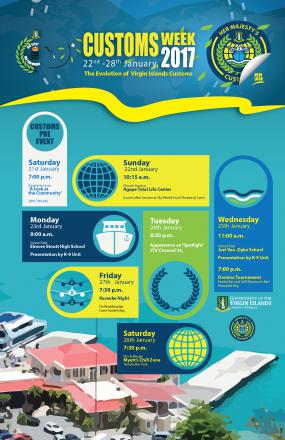 The improved internal processes used to deliver faster and more efficient services to industry partners and the public will be highlighted during Customs Week 2017.

Customs Week will commence on January 22 with activities including a church service and school presentations.

Commissioner of Customs, Mr. Wade Smith said that the department has made significant strides in simplifying Customs business processes, including the implementation of the Computer Automated Processing System which requires stakeholders to submit Customs entry forms online.

He added that this has eliminated time spent in lines, importers are receiving their goods in a timely manner, and goods are reaching the consumers at a much faster pace.

Commissioner Smith stated that the major improvements at the department were as a result of a diagnostic study conducted over 16 years ago. “In 2000 we began a diagnostic study which highlighted our strengths and weaknesses with an aim to review and make recommendations to improve the legislative framework, substantial training and development of staff, and a complete overhaul of the organisational structure.”

He said the study was conducted to meet the demands of an evolving and dynamic trade environment, and as a result, the department implemented the Customs Reform and Modernisation Programme, K-9 Unit, Flex Team, Internal Audit Team and Marine Task Force.

Commissioner Smith said that training played an integral role in the enhanced services now offered by the department, and gave the assurance that the department will continue to improve its services.  “We are revising what was previously known to the boating community as the Regional Clearance System, a pre-arrival notification system for boaters, this is not a pre-clearance system”, he added.

This system now renamed ‘Sail Clear,’ will be coming online in the near future and will allow boaters to submit their information prior to arrival which should allow for an expedited clearance.

The week’s activities will also include domino tournaments, karaoke night, and management will host appreciation lunches for the various Customs stations in the Territory. The public is encouraged to tune-in to ‘A Look at the Community’ on ZBVI 780 AM at 7:00 p.m., and ‘Spotlight’ on JTV Channel 55 at 8:30 p.m.

‘The Evolution of Her Majesty’s Customs’ is the theme for Customs Week 2017, and the activities will culminate on Saturday, January 28 with a Mix and Mingle at Myett’s Chill Zone, Tortola Pier Park at 7:30 p.m.