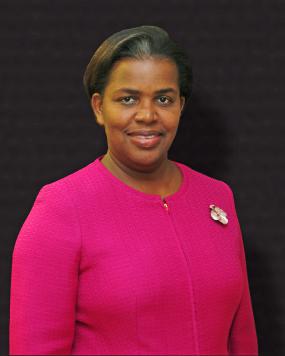 Ms. Smith’s appointment was made following the approval of His Excellency the Governor, Mr. Augustus Jaspert in accordance with section 95(1) of the Virgin Islands Constitution Order, 2007, on the advice of the Judicial and Legal Services Commission (JLSC).

As Attorney General, Ms. Smith will serve as the principal legal advisor to the Government as established by the Constitution, and has the overall responsibility for all aspects of civil litigation.

Ms. Smith will also negotiate contracts for and on behalf of the Government and serve as the Territory’s central authority in the processing of mutual legal assistance matters. Additionally, she will manage the operations of the Attorney General’s Chambers.

Governor Jaspert said Ms. Smith’s breadth of experience will be a valuable asset to the Virgin Islands.

He said, “Ms. Smith is a well-respected legal practitioner and brings professional experience from across the broad range of international and domestic legal matters that must be considered by the Government in its day-to-day work. I trust that this experience will strengthen Cabinet and the Territory as a whole.”

The Governor also extended gratitude to Mr. Baba Aziz for his years of service as Attorney General.

“Mr. Aziz has been an excellent and dedicated Attorney General, and I wish him well as he moves on from the post,” he said.

Meanwhile, Premier of the Virgin Islands, Honourable Andrew A. Fahie, extended a welcome to Ms. Smith, adding that the incoming Attorney General is a very experienced and knowledgeable legal practitioner, and that he looks forward to her continued contributions to the Territory.

“I am very pleased and proud to see that, as a Virgin Islander, Ms. Smith has been able to traverse the rigorous screening and recruitment process successfully and met the stringent requirements of our Virgin Islands Constitution Order, 2007 Section 95 (5)(6),” Honourable Fahie said adding, “Ms. Smith stands as yet another beacon to inspire Virgin Islanders, especially our younger generations so that they too can aspire to the highest offices in this Territory and play an active role in shaping our country as we continue to position ourselves towards a prosperous BVI for generations to come.”

The Premier further stated that Ms. Smith also assumes this important Constitutional role at a very critical time in the history of the Virgin Islands as the Territory embarks on another Constitutional Review exercise.

“I know that her knowledge and expertise will prove to be a tremendous asset to Cabinet, House of Assembly, National Security Council, Government of the Virgin Islands, Public Service, and this Territory. My Government has an ongoing Legislative Agenda, and I look forward to Attorney General Smith hitting the ground running”, Premier Fahie said.

He also thanked the outgoing Attorney General, Mr. Baba Aziz, for his years of service to the Territory.

“Honourable Aziz has been a tremendous resource to the Virgin Islands. He has lent his expertise to the development of numerous pieces of legislation that have played and which will play an important role in the life of Virgin Islanders. We are indeed grateful to him for his service,” Honourable Fahie said.

Mr. Archer said, “Our Attorney General needs to balance a range of responsibilities. I am pleased that Ms. Smith brings skills gained from working in the private sector as well as within the Public Service, and that she has a strong record of lending her skills to voluntary boards and commissions.”

The Deputy Governor likewise thanked Mr. Aziz, who was first appointed to the Public Service as Senior Crown Counsel in 2001. Mr. Aziz went on to serve as the Territory’s Principal Crown Counsel from 2007 to 2010, and as Attorney General from 2010 to 2011 and again from 2015 to the present. Mr. Aziz’s appointment ends September 30.

Mr. Archer said, “Over his 16 years of service to the Territory, Mr. Aziz brought admirable commitment and professionalism. I wish him well in his future endeavours.”

Ms. Smith previously served as General Counsel at the Financial Services Commission (FSC) from 2013 to 2020 where she developed corporate policies, procedures and programmes; and was the key legal advisor to the FSC and the BVI International Arbitration Centre to ensure compliance with internal policies and applicable laws.

She was seconded to Premier's Office as Acting Permanent Secretary from 2017 to 2019, where she handled the strategic management and administration of the Premier's Office including supervising and coordinating the work of departments under the Premier’s portfolio; preparing and managing the ministry's annual budget; developing and implementing strategic plans; and serving as an Ex-Officio member on statutory boards and organisations such as the BVI Tourist Board and BVI Finance.