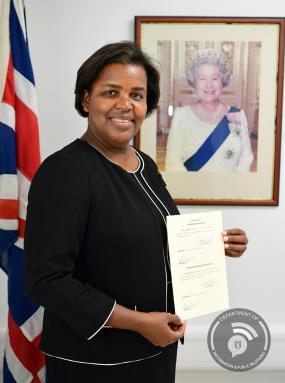 Ms. Dawn J. Smith has taken the Oath of Office and is the Territory’s new Attorney General.

His Excellency the Governor Augustus Jaspert administered the oath this morning and said that he was delighted to appoint Ms. Smith to this key post.

“I wish you great success in your new role,” Governor Jaspert said, adding, “I trust you will make that success happen, and as you do, you will also have the support of all of us in Cabinet and the Public Service. You are an integral part of BVI’s leadership now and your work will help underpin the Territory’s success.”

Governor Jaspert stated, “As you sign the Oath of Office, I want you to think about the responsibility you are taking on and the role you will hold in office.  As AG, you will support the rule of law, which is vital and the core component of success in any country, state or territory. As Government’s top legal advisor, I know you will operate without any fear or favour, operate with integrity and impartiality, and have no qualms about stating what the law is.”

Deputy Governor David Archer congratulated Ms. Smith, and welcomed her back to the Public Service.

Mr. Archer said, “I am very proud that we are able to appoint someone whom we have seen succeed both in the private sector and here in the Public Service.  Ms. Smith exemplifies the level of skill and professionalism we have in the Territory, and I am certain she will bring her understanding of the law as well as the Virgin Islands to bear as she carries out her duties.”

After affirming and signing her oath, Ms. Smith said she looks forward to taking on this new professional challenge.

“I only have one ambition, which is to do the job properly,” she said,

Since she was named as the Territory’s next Attorney General, Ms. Smith has gratefully received an outpouring of support from persons in the community and stated that she is very thankful for their kind wishes, and looks forward to their continued support during her tenure.

In her capacity as Attorney General, Ms. Smith will also serve as a member of the House of Assembly and be sworn in at a Special Sitting of the House today. She replaces Mr. Baba Aziz who served in the post from 2010 to 2011 and again from 2015 to 2020.

She previously served as General Counsel at the Financial Services Commission (FSC); in the Premier's Office as Acting Permanent Secretary; as Attorney at Conyers Dill & Pearman; as Director of the London Office; and as Attorney at O'Neal Webster O'Neal Myers Fletcher & Gordon.