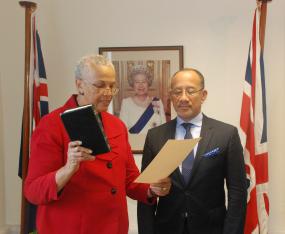 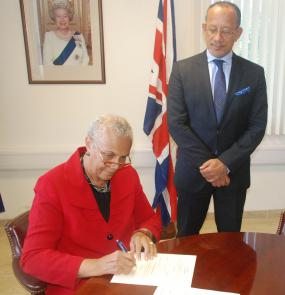 His Excellency the Governor, Mr. John S. Duncan, OBE, is away from the Territory until January 6.

During this period, Deputy Governor, Mrs. V. Inez Archibald, CBE, has been appointed to act in the Office of Governor.

Mrs. Archibald’s appointment is in accordance with section 37 (1)(a) of the Virgin Islands Constitution Order 2007 which states, “During any period when the office of Governor is vacant, or the Governor is absent from the Virgin Islands or is for any other reason unable to perform the functions of his or her office, the Deputy Governor shall during Her Majesty’s pleasure, act in the office of Governor and shall perform the functions of that office accordingly.”

Newly appointed Acting High Court Judge for the Commercial Division of the Eastern Caribbean Supreme Court, Justice Gerard Farara, QC, presided over the swearing-in ceremony.  The occasion holds significant importance as it is the first time Justice Farara, a BVI Islander, has performed this role in his new capacity.

The swearing-in of the Acting Governor, Mrs. V. Inez Archibald, CBE, by Justice Farara is also a momentous occasion for the Territory, as it is the first time that a Virgin Islander, has been sworn in by a fellow Virgin Islander, to act in the Office of the Governor.