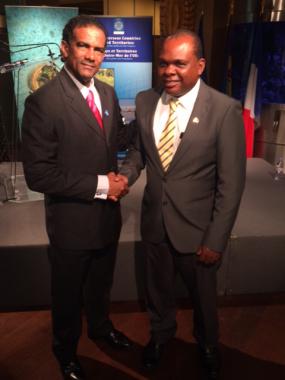 Deputy Premier and Minister for Natural Resources and Labour, Dr. the Honourable Kedrick Pickering has pledged his continued support for Small Island Developing States (SIDS) in 2016.

Honourable Pickering made the pledge at an event co-hosted by the Global Islands Partnership (GLISPA) and Overseas Countries and Territories Association (OCTA) in the margins of the UNFCCC COP21 meeting in Paris on December 8.  The theme of the event was "Innovative Island Solutions."

In his official remarks, the Deputy Premier said, "I will continue to advocate for Small Island Developing States in the year ahead because we are among the most environmentally vulnerable places on earth. The BVI is no less affected by many of the same issues our sister islands in the Pacific and Indian Oceans are facing, such as climate change and biodiversity loss. We must work closely together along with our international partners to overcome any obstacles to our sustainable development."

Speaking on the theme of the event, he went on to say, "Islands hold the key to solving many of the environmental challenges facing our planet. Our size makes us a laboratory for a range of innovative solutions in key areas such as renewable energy and marine conservation."

The British Virgin Islands (BVI) is an active member of both GLISPA and OCTA which champion the sustainable development of islands.