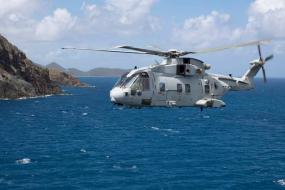 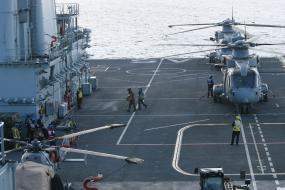 The Humanitarian Aid and Disaster Relief (HADR) exercise conducted on Norman Island over the weekend has been called a success.

The exercise was led by the United Kingdom’s (UK) Task Group in the Caribbean to ensure that in the event of a hurricane, RFA Argus and HMS Medway are able to land specialist teams and emergency items ashore in the BVI to respond and support in the immediate aftermath.

This exercise was also an opportunity for both ships to practice working together quickly, safely and effectively should they need to deliver support to the people of the BVI.

His Excellency, Governor Augustus Jaspert said, “I am pleased to hear that the exercise was a success. Although we all hope the Territory never needs to call on this support, it’s imperative to make sure we’re prepared for all eventualities, especially given the added risks around COVID-19. This exercise and the two ships’ ongoing presence in the region is a strong signal of the UK’s support for BVI for which I am grateful.”

RFA Second Officer Alec Feuillade was ‘Beach Master’ during the exercise and managed the landing areas for the sea boats. He said: “As Beach Master, I can help liaise between the land and the ship to ensure we are delivering aid and engineering support where it is most needed. This helps the operation run more smoothly.”

Troops were also transferred to HMS Medway by sea boats, before continuing on to conduct beach landings. Once ashore, the Crisis Response Troop conducted immediate surveys of the area with their specialist equipment to assess any damage and reported their findings to the Command Group on RFA Argus.

Members of the troop included personnel trained in a variety of trades such as electricians, bricklayers, motor mechanics, plumbing and chainsaw operators who supported local communities with clearance of initial damage in addition to providing help to re-establish vital infrastructure such as power lines and water supplies.

The Government of the Virgin Islands, including the Ministry of Health and Social Development, worked closely with both ships to ensure full compliance with the Territory’s COVID-19 measures before the exercise took place.

Members also adhered to strict on board safety measures, including social distancing and proper hygiene practices. Individuals who disembark from the ships were monitored and isolated upon their return and their cabins thoroughly sterilised.

The ships departed Territorial waters on Wednesday but will be on standby in the region, should extra support be needed by the people of BVI in the event of a hurricane.

Both ships are stocked with emergency aid from the UK Government, including food, water, sanitation products and medical supplies, along with equipment that can help clear and repair some damage.

Governor Jaspert and officials from the Department for Disaster Management will host hurricane preparedness meetings on Jost Van Dyke and Anegada later this week and will meet with members of the local community, including Resilience Teams, to answer questions and share the latest updates and advice on hurricane preparedness. They are part of the ongoing and extensive hurricane preparations taking place across the Territory.