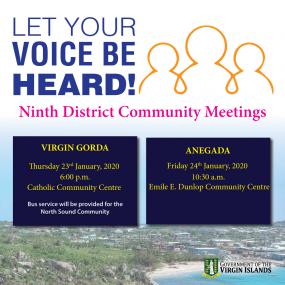 Residents of the Ninth District and surrounding communities will be given an opportunity to have their concerns addressed at a series of community meetings to begin later this month.

Minister for Natural Resources, Labour and Immigration and Ninth District Representative Honourable Vincent Wheatley will host the district meetings and will also update residents on plans for development of the district.

Minister Wheatley said, “As the Government of the Virgin Islands has said before, we are an unconventional Government, but we are a Government of inclusion as well, so it is only fitting that I consult with my constituents to discuss the plans for the district so that we can move forward in one accord. The plans have the potential to affect their lives the most, so it is important to hear their feedback.”

The first meeting will be held on Virgin Gorda on Thursday, January 23 at the Catholic Community Centre at 6:00 p.m. Transportation will be provided for persons in the North Sound Community.

The second in the series of meetings will be held for residents on Anegada at the Emile E. Dunlop Community Centre on Friday, January 24 at 10:30 a.m.

The At-Large Representatives will also be present and will also address residents’ concerns.