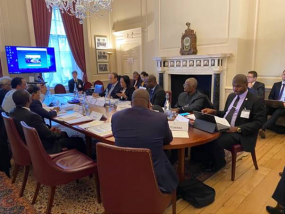 Minister for Education Dr. the Honourable Natalio Wheatley has said that the opportunity to network with fellow Education Ministers at the Fifth Education Ministers Action Group Meeting in London was particularly timely and beneficial with education reform being one of his key priorities.

Honourable Wheatley joined Commonwealth Education Ministers at the Commonwealth Secretariat Headquarters - Marlborough House in London last month where he provided an update on the state of education in the Territory and current initiatives under his ministry. He stated that some progress was made in the Territory since significant infrastructural damage was inflicted on all schools during the passage of Hurricanes Irma and Maria in 2017.

The Education Minister shared that the Territory is using the lessons learned in the aftermath of the hurricanes to improve the education sector while implementing regional education initiatives through CARICOM during the recovery period. He highlighted the fact that there was significant work yet to be done including construction of a new special needs school.

Honourable Wheatley also spoke of the Government’s desire to review the Territory’s curriculum and focus on teacher training and rebuilding green and sustainable schools, which he noted was consistent with the Commonwealth’s Nadi Declaration which places emphasis on building resilience through education and education for sustainable development. He further made mention of his ministry’s plans to focus on the vocational capability of schools ensuring that all students are equally equipped to contribute to the economy.

Reflecting on the meeting, Honourable Wheatley shared, “I was honoured to be invited as an observer to the Education Ministers Action Group Meeting by the Commonwealth Secretariat.  The opportunity to network with fellow Educations Ministers and get a grasp of best practices throughout the Commonwealth was particularly timely and beneficial with education reform being one of my key priorities.”

The Education Ministers Action Group (EMAG) Meeting was hosted by the Commonwealth Deputy Secretary-General, Dr. Arjoon Suddhoo, and brought together ministers from across all Commonwealth regions. The main objective of the meeting was discussions around advancing quality education for Commonwealth citizens; a mandate which is in keeping with achieving the United Nations Sustainable Development goals by 2030. The EMAG allowed minsters to have meaningful exchange on best practices, share new initiatives and explore new partnerships and opportunities.

Discussions were centred around building resilience through education, capacity building for educators, developing educational facilities which are fit for purpose and supporting children with disabilities and special needs. Ministers also presented progress updates from the Africa, Asia, Caribbean and Americas, Europe and Pacific regions and agreed to the priorities of the Conference of Commonwealth Education Ministers which will take place in 2021 in Kenya.

The Minister’s attendance at the meeting follows on from an initial meeting with Head of the Commonwealth’s Social Policy and Development Section, Mr. Layne Robinson, in November 2019 and highlights the Territory’s commitment to furthering international engagement, particularly with the Commonwealth.

The Commonwealth is a voluntary political association of 53 independent and equal countries, nearly all of which were former territories of Britain. The British Virgin Islands is associated with the Commonwealth through its relationship with the United Kingdom.