Dr Robert Mathavious To Receive Honour For His Services To BVI 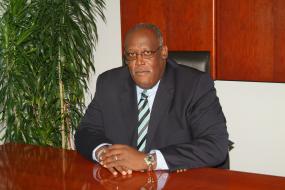 Dr Robert Mathavious is the Territory’s newest recipient of the Order of the British Empire (OBE) in the Queen’s 2020 Birthday Honours for his contributions to financial services.

Dr Mathavious has served the British Virgin Islands for nearly 40 years across the finance and volunteer sectors.

He is widely known as the chief architect behind BVI’s financial services sector, a sector which now contributes more than 60% to the Territory’s GDP. He was a key advocator for the establishment of the Financial Service Commission - which he served as Managing Director of since its inception – and also held multiple positions in the public service over the past 40 years.

Dr Mathavious has also made invaluable contributions in the voluntary sector too, serving more than 20 philanthropic groups including supporting the elderly and establishing the Youth Boys Brigade. Following the 2017 Hurricanes, Dr Mathavious showed leadership in bringing together key players to plan recovery and maintain critical industries and resources. He helped to generate much needed revenue for the Territory and played a key role in the establishment of the Recovery and Development Agency.

Throughout his work, Dr Mathavious has shown a true commitment to the Territory’s advancement and worked collaboratively and in partnership with the community. Throughout his leadership of the Financial Services Commission, he has championed BVI as a stable, credible and trustworthy financial centre, in line with international standards and ethics. Similarly, his values of transparency and accountability were forefront in his work to help establish the Recovery and Development Agency.

His Excellency Governor Augustus J.U. Jaspert said he was delighted by the news of Dr Mathavious’ Honour. He stated, “I congratulate Dr Mathavious and thank him for all he has done to shape and advance the Territory over the past four decades. His achievements are truly exemplary and will continue to bring positive benefits to BVI for generations to come. It has been a privilege and honour to know him and I know the whole community will agree that he is extremely deserving of this recognition for his service.”

Dr Mathavious said: “Being recognised for service to my country leaves me humbled and thankful. I am indebted to the governments of the BVI and UK, who financed my education and better equipped me to serve my community. Building BVI financial services was not the work of one man but of a team and I share this honour with the dedicated staff of the Ministry of Finance and the Financial Services Commission.”

Her Majesty the Queen’s Birthday Honours are awarded to individuals in recognition of their outstanding achievements and long-term service to their local community.