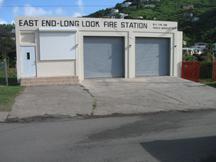 The East End/Long Look Fire Station is back in operation after being closed for about three years.

The Fire Station was closed due to limited resources and engines. The Ministry of Communications and Works, for logistical reallocation purposes, joined all resources and services from the various fire stations into the central location of Road Town to create a stronger, more effective unit.

The fire station was reopened on August 19 and Acting Chief Fire Officer, Mr. William Penn said the department is pleased to communicate this information and is now responding to calls for assistance within and from that station area.

Mr. Penn thanked the communities for their understanding during the closure and assured them that every step of the way, their safety was paramount.

He said, “Human resources were always deployed to any reported emergency within the eastern area and was supported by additional resources from the central fire station of Road Town. Those civilians who found it moving to volunteer their time to the effort of community safety, we commend them for their support.”

The Fire and Rescue Department has stated that efforts are being made to have the West End/Capoon’s Bay Fire Station reopened later this month. A public announcement will be made as soon as the works are complete.

The department continues to urge the community to be safe and in the event of an emergency contact 999 or 911and your call will be processed based on the current event or happening.