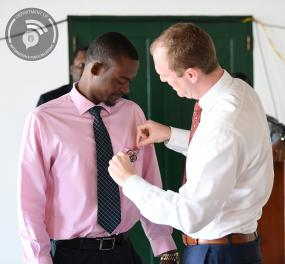 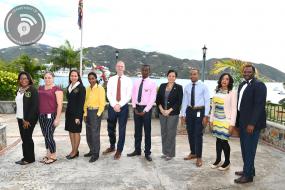 Eight public officers were recognised for exceptional customer service and pinned as the first members of the Public Service Star Membership Club.

A public officer is entered into the Star Membership Club after receiving an exceptional customer service rating from a member of the public.

His Excellency the Governor Augustus J. U. Jaspert and Deputy Governor Mr. David D. Archer, Jr. pinned the officers at a special Heads of Department meeting called on January 29 at the Reception Hall, Government House.

Mr. James Richards of the Department of Trade, Investment Promotions and Consumer Affairs was the sole officer to be pinned with the gold star for receiving 25 commendations.

Ms. Sheriece Smith from the Department of Information and Public Relations received special recognition, on being commended even though her department is not included in the pilot programme.

Programme Coordinator at the Office of the Deputy Governor, Ms. Kedimone Rubaine said to the recipients, “You are officially members of the first ever Public Service Star Membership Club.  Wear your pins with pride!  This honour should not be taken lightly.  I encourage you to maintain the exceptional level of customer service you clearly already produce.  The Public Service will be made an example of the type of organisation others should try to mimic.  We are proud of you and wish you further successes in your Public Service career.”

Members of the public have the opportunity to rate public officers’ performance by submitting feedback via the Public Service Customer Service Virtual Mailbox kiosk located in nine pilot departments in the Public Service.  Submissions may also be made at https://eservices.gov.vg/virtualmailbox/.

The mailbox is designed to answer the question, ‘How did I serve you?’  It provides a source of transparency and accountability in the area of customer service as the Public Service transforms to attain ‘Public Service Excellence’.

Photo 1 – Mr. James Richards of the Department of Trade, Investment Promotions and Consumer Affairs receives the gold star from His Excellency the Governor Augustus Jaspert as the sole officer to receive 25 commendations, the highest for the Public Service Star Membership Club.  (Photo Credit:  GIS: Ronnielle Frazer)

Photo 2 - His Excellency the Governor Augustus Jaspert and Deputy Governor Mr. David D. Archer, Jr. are pictured with eight public officers who were recognised for their exceptional customer service and dedication as the first members of the Public Service Star Membership Club (left to right).  (Photo Credit:  GIS: Ronnielle Frazer)