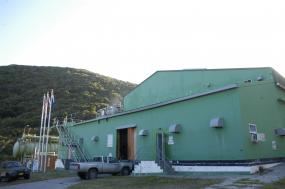 The BVI Electricity Corporation has embarked on a programme to improve the stability of the Territory’s electricity supply.

Preparatory work has already started and construction will officially begin on Monday, March 23, following a ground breaking ceremony to mark the occasion.

The Government of the Virgin Islands recently approved an agreement to undertake Phase V of the BVI Electricity Corporation’s Power Development Plan. This announcement was made by Minister for Communication and Works, Honourable Mark Vanterpool, during the Fourth Sitting of the Fourth Session of the Second House of Assembly on March 12.

“The Phase V development involves the purchase and installation of two diesel-fired generators, adding production capacity of over 16 megawatts of electrical power, plus two 34.5 KV cables, which will follow a separate route to that of the existing Pockwood Pond to Road Town line,”  Honourable  Mark Vanterpool said.

The plan is intended to cater to the growing demand for electrical energy within the Territory and provide reserve capacity to take care of planned and unplanned maintenance on the generating units, thereby reducing the need for load shedding.

The Minister added that engines are being purchased from Wartsilla, an engineering corporation out of Finland, which is listed in the United Kingdom.

“Wartsilla is no stranger to the Virgin Islands, having installed six 5.5 megawatt engines in the Territory between 1995 and 2006”, Honourable Vanterpool said.

The Phase V Power Development Plan will be installed over the next 18-24 months.

The BVI Electricity Corporation has been developing Pockwood Pond since its inception in 1990. Phase I of this development included the construction of the power station and two 3 megawatt generators. In 1995, Phase II saw the installation of two 4.5 megawatt generators while three 6 megawatt Rolls Royce units were added in 1999 as a part of Phase III. In Phase IV, all Rolls Royce engines were replaced in 2005-2006 with 5.5 megawatt units.