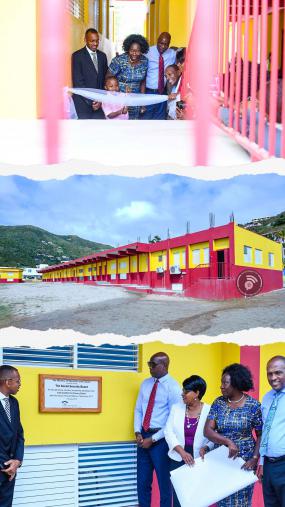 Students and teachers of the Enid Scatliffe Pre-Primary School can now return to the comfort and familiarity of their own classrooms following the completion of reconstruction work on the building.

A ceremony was held on Wednesday, February 20 to officially hand over the keys to the school that was severely damaged during the passage of hurricane Irma.  The restoration of the facility was made possible through the efforts of the Virgin Islands Social Security Board.

Remarks at the ceremony on behalf of Premier and Minister of Finance, Dr. the Honourable D. Orlando Smith, OBE praised the Social Security Board and expressed gratitude for its assistance in the reconstruction of  the Enid Scatliffe Pre-Primary School which assists in shaping the lives of the pre-primary school students.

Meanwhile, Minister for Education and Culture, Honourable Myron V. Walwyn spoke about the benefits reaped from partnerships between the public and private sectors.

Honourable Walwyn said, “Today is yet another example of the benefits of this initiative.  If we ever doubted that the public-private partnership model could work, we have had proof several times over that it can work. The Ministry of Education and Culture has had our schools rebuilt, refurbished and resourced through such partnerships over the seventeen months since the passing of the storms.”

Chairman of the Virgin Islands Social Security Board Mr. Ian Smith said the board understands its social obligation within the community and as sponsors to the school, they were more than willing to contribute to its reconstruction.

Mr. Smith said, “The Social Security Board must make sure it contributes socially to maintain a level of social protection to all residents of the Virgin Islands.  This investment ensures that students who have been misplaced and disenfranchised after the hurricanes are returned to an environment conducive to learning.”

Other schools that are under reconstruction or scheduled for reconstruction in early 2019 by Government and/or private benefactors are: Enis Adams Primary School, Bregado Flax Educational Centre-Secondary Division and the Elmore Stoutt High School (L-Shape Building).

The Ministry of Education and Culture is grateful for the financial support and labour of love from the many benefactors and volunteer groups who have contributed towards the restoration and rebuilding of schools in the Territory.