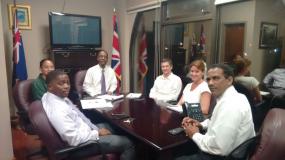 The Government of the Virgin Islands has initiated the North Shore Integrated Coastal and Watershed Stabilisation Project to address issues of flooding, sediment pollution and beach erosion in Cane Garden Bay and Brewer’s Bay.

Deputy Premier and Minister for Natural Resources and Labour, Dr. the Honourable Kedrick Pickering in a statement at the last sitting of the House of Assembly, said the project is managed by the Organisation of Eastern Caribbean States (OECS), and will be implemented under the umbrella of the European Union-funded Global Climate Change Alliance (GCCA) Project on Climate Change Adaptation and Sustainable Land Management in the Eastern Caribbean.

Under the GCCA Project, each participating country has been allotted resources to design and implement physical adaptation pilot projects, which are on-the-ground projects that will help to reduce the impacts of climate change to local communities. This specific pilot project has a total value of 842,000 Euro (approximately $890,000).

Minister Pickering said issues of flooding are well known in Cane Garden and Brewer’s Bay and that over the years business owners, homeowners and residents have experienced the costly and painful impacts of these on-going issues.

Minister Pickering further stated that the current project to address these issues is set apart from previous efforts by two important factors.

He said, “Firstly Madam Speaker all proposed pilot projects will be based on the soundest science emanating from comprehensive studies of the Cane Garden Bay and Brewer’s hillsides, beach area and coast. Secondly, the project would also include the implementation of solutions designed based on the studies and models, in the form of physical pilot projects, meaning tangible projects on the ground.”

Partner at Smith Warner International, Mr. Phillip Warner will be conducting the studies and has made an initial visit to the Territory last week.

Mr. Warner said his team would be collecting data on waves and stream flow, assessing reefs, and using computer models to simulate processes and come up with engineering and eco-system based solutions to the issues. The team will also collect data and perform the analysis to develop a hydrologic and coastal dynamics model of the areas.

Mr. Warner added, “We will be engaging the public through consultation during the development of solutions and at the end of the design process we will be engaging local and international contractors to implement the works.”

The Ministry anticipates commencement of the pilot projects in late 2016 (or early 2017) with completion by the end of 2018.