ESHS L-Shaped Building To Be Renamed After Veteran Educator 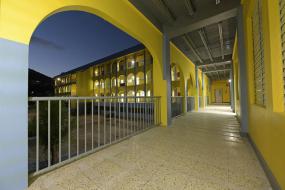 The L-Shaped Building of the Elmore Stoutt High School slated to be officially opened on Friday, September 6 will be renamed after veteran educator Ms. Lillian Adorothy Turnbull.

Ms. Turnbull’s contribution to the development of education for the past 50 years will be recognised when the Government of the Virgin Islands officially re-opens the building under the theme “Let There Be Light…Elmore Stoutt High School Shining Bright”.

Premier and Minister of Finance, Honourable Andrew A. Fahie, while presenting his Budget Address of 2019 in April, had stated that this year the L-shape building at the Elmore Stoutt High School campus will be rehabilitated, so that students can return to full session, classes by September 2019. The building was completed in time for the opening of the new school year.

Government will also host a Service of Thanksgiving in appreciation to God for seeing the Territory through its recovery efforts following the passage of Hurricanes Irma and Maria.

The public is invited to attend the event to celebrate another milestone as the Territory continues to move forward.

Numerous public schools were damaged during the passage of the hurricanes in 2017 which resulted in changes being made to the public schools’ operations. Designs for remaining damaged schools will continue as the ministry seeks to provide the best learning environment for students across the Territory.