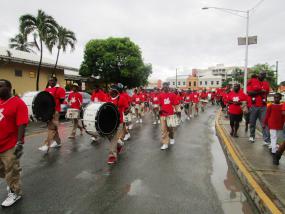 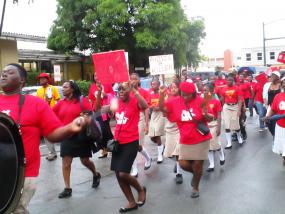 The BVI Seventh Day Adventist Church and its Youth Society hosted a "March against HIV” to raise awareness on the disease in the Territory.

The activity was planned and executed in collaboration with the Family Health Unit of the Ministry of Health and Social Development.

Participants marched to the rhythm of the Pathfinder's Drum Core from the Band Stand in Road Town chanting, “Abstinence is the key to be HIV free, Sex is great but it can wait, to beat HIV/AIDS, you should get tested and Join the fight and knock AIDS out of sight.”

The march ended at the parking lot next to the One Stop Mall where Family Health Coordinator, Ms. Noelene Levons spoke on sexual and reproductive health issues, HIV and other sexually transmitted infections.  She also stressed the importance of abstinence, as well as how to be prepared for sex when one is ready.

Ms. Levons said the event was a perfect example of community ownership and partnership, because the BVI Seventh Day Adventist church took the initiative to plan and coordinate the event in collaboration with the public sector.

Ms Levons added, “I hope that the event will expand in the future with the involvement of other faith-based organisations as well as schools and civil society groups to become an annual initiative."

Youth Leader, Mr. Jacob Adolphus said the march was planned and executed by the Youth Department of the Seventh Day Adventist church and the purpose was to raise awareness on HIV and AIDS in the Territory.

He added, “I believe that it was very successful, the community got the message and the presenters were on point. I hope that everyone would be more conscious about their sexuality and that this event would become an annual one because we believe that knowledge is power."

Meanwhile, Pastor Lariano Webster incorporated the story of the prodigal son and the forgiveness and reconciliation of God when persons choose to do things their own way. Mr. Henderson Title also shared his testimony of losing his best friend to AIDS. He said he has pledged his commitment to share his friend's experience in order to create awareness.

The march was coloured by many persons who wore red T-shirts with messages including, "Join the Fight against HIV!" and placards with printed slogans such as "Sex is great so...set a date", "Abstinence is the cure for HIV that's for sure", and "Don't hop into bed until you are wed."