Festival Of The Arts To Feature Full Day Of Cultural Activities 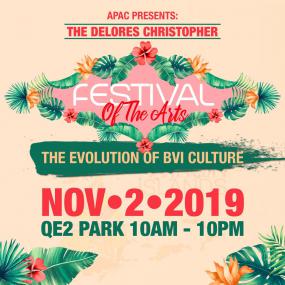 Various aspects of the Territory’s culture will be on display when the Association for the Promotion of Arts and Culture hosts a Festival of the Arts on November 2.

Honourable Wheatley announced the upcoming event during the seventh sitting of the first session of the fourth House of Assembly. He said the festival will be recognised as a pre-culture week event and will honour former Legislator the late Delores Christopher.

“Delores Christopher was very much so in support of the arts. In fact she held a festival of the arts when she was the representative for the fifth district … so we wanted to have this in her honour given her commitment to the arts and Virgin Islands’ culture.” Dr. Wheatley stated.

The festival will be held under the theme, “The Evolution of BVI Culture” and will showcase the developing aspects of Virgin Islands’ culture.

“A lot of times when we speak about culture we speak about how it was in the past like a historical idea of what culture was back in the day. But we want persons to know that culture is something living, breathing, growing, and culture basically continues” the minister said. He added, “So we want our authentic BVI culture to grow, develop into the future and we want persons to see culture as something that they live and exhibit today.”

The Association for the Promotion of Arts and Culture is comprised of the BVI 2019 Carifesta delegation which includes poets, graphic designers, painters, dancers, fashion designers, film makers, photographers and storytellers.

All are invited to attend the all-day event at the Queen Elizabeth II Park from 10:00 a.m.