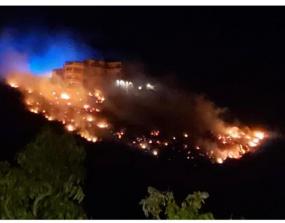 Minister for Transportation Works and Utilities Honourable Kye Rymer has commended Chief Fire Officer Zebalon Mclean and his officers for extinguishing a bush fire that was threatening the residence of Mr. and Mrs. Simon Potter at Meyers Estate, Tortola.

Honourable Rymer said that when he arrived at the scene on May 8, fire officers were at both ends of the fire working tirelessly to contain the large area engulfed in flames.

“I must say congratulations to those guys, they worked hand in hand, they worked together,” he said, adding, “We must also acknowledge the Potters, for giving us the ability to use their home and their cisterns, for use of water.”

Honourable Rymer pledged his support to the Fire Department and stated that there is a need for additional apparatus including water pumps and communication devices. He said his Ministry will support the Fire Department in getting the equipment that is vital to its operations.

Meanwhile, Chief Fire Officer Mr. Zebalon McLean is urging the public to refrain from burning anything during this dry season. Mr. McLean said, “The island (Tortola) has the potential to have uncontrollable fires.” He added investigations have also found that most of the fires his officers have been called to put out were started as controlled fires.

The Virgin Islands Fire and Rescue Services is reminding the public not to engage in backyard or hillside burning at this time, given the extremely dry conditions.