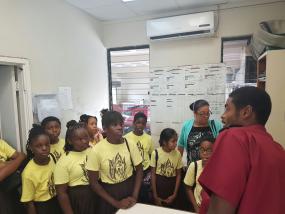 After a week filled with events in observance of Fire Safety Awareness Week, the Virgin Islands Fire and Rescue Service says it is pleased with the community support they received in response to efforts to highlight the importance of fire safety.

The week’s activities focussed on educating the public on potential fire hazards that may be either unknown to most, or are hidden in plain sight.

Chief Fire Officer, Mr. Zebalon McLean said, “We were successful in maintaining focus on the theme of the week, which dealt with those hazards that are either right under our noses, or hidden away in a cabinet, under a rug, in a closet or in a storeroom. We used every opportunity to remind the public that those things we do not pay attention to or are hidden, can pose a danger.”

During the week, fire officers interacted with members of the public daily through school visits, community service initiatives in various neighbourhoods, nightly social activities and giving back to the community, through clean-ups and donations to the schools. Mr. McLean said this year’s Fire Safety Awareness Week was a successful one.

“We had some young people who were involved in preparing for the week and they brought some fresh enthusiasm to the process. It was also good that officers had a direct input into of the kind of events they would like and how they would like it to be structured,” said Mr. McLean.

Co-chairperson of the planning committee, Fire Officer #55 Winston Farrington Jr. said, “Everything that we set out to do this year was achieved. We got the word out into the communities and we were also able to reach out to the sister islands.”

Members of the community, including students from various schools and members of youth organisations visited the Fire Headquarters and got a first-hand look of the equipment as well as receive information on the operations and the functions of the service.

This was a historic year for the Virgin Islands Fire and Rescue Service, as it celebrated 20 years of observing Fire Safety Awareness Week and 30 years of being an independent fire service.