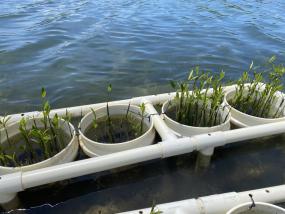 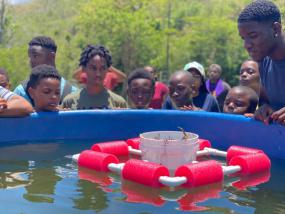 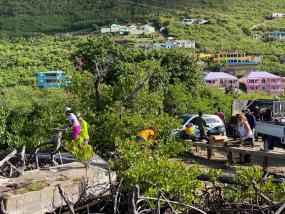 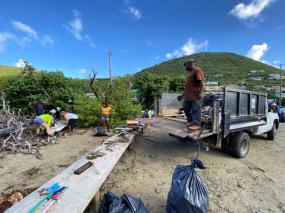 The nursery was set up in July of this year with support from the Ministry of Natural Resources, Labour and Immigration and Unite BVI and has been cultivating Red Mangrove seedlings to suit the needs of areas around the Territory that were damaged by the hurricanes of 2017.

Research Consultant Dr. Lianna Jarecki is pleased with the progress being made at the mangrove nursery and its ability to plant, grow, and replace the mangrove wetlands that have been damaged.

Both sites have been cleaned thoroughly in preparation for the planting of the new seedlings.

Sea Cows Bay was cleaned in August by the interns at the CAMS Mangrove Nursery and the Jost Van Dyke Preservation Society. The mangrove site at West End was cleaned on September 26 by a team of volunteers from the Rotary Club of Road Town, Rotaract, and Commercial Dive Services. Approximately six cubic yards of trash and debris were removed from these two sites combined.

Once planted, the seedlings will be monitored by mangrove restoration partners, including the National Parks Trust, Rotary, and community volunteers.

The Ministry of Natural Resources, Labour and Immigration will continue to lead Territory-wide efforts and support community partners to restore the Territory’s coastal mangrove forests and the many advantages they bestow upon the environment and communities.