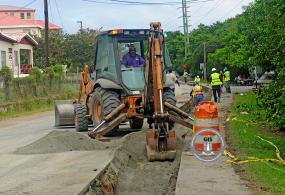 Phase II of the Force Main on the East End road continues this week for the installation of force main pipes from Paraquita Bay to Long Swamp.

Premier and Minister of Finance, Dr. the Honourable, D. Orlando Smith, OBE while delivering his 2017 Budget Address under the theme ‘Charting the Course: Positioning the Virgin Islands for the Future’ said, “By the end of 2017, we expect to have East End and Long Look functioning on the new sewerage system.”

The Minister for Communications and Works, Honourable Mark Vanterpool explained that the project involves the installation of over 17,000 feet of ten, eight and six inch pipes between Brandywine Bay, Paraquita Bay, Long Swamp, Paraham Town and Major Bay.

Honourable Vanterpool said, “We are now installing the pipes to Long Swamp, so that when we are finished, we will be able to take sewerage form there to be treated at Paraquita Bay, at a tertiary level.”

Works between Paraquita Bay and Long Swamp involves the installation of 10,171 feet of HDPE pipes and force main pipes from Paraquita Bay to Brandywine Bay for the outfall that was completed in December 2016.

The overall programme is expected to be complete by year’s end with road works slated to be on-going until that time.

The Ministry of Communications and Works apologises for the inconvenice caused during this time as there will be disruptions in travel times in the area.

Motorists driving to and from East End are being advised to take alternate routes on the Ridge Road to avoid delays and congestion in work areas.

The completion of the National Sewerage Programme will give residents access to a modern sewage collection and treatment system and will put an end to the current methods of sewerage waste disposal with an environmentally friendly solution.