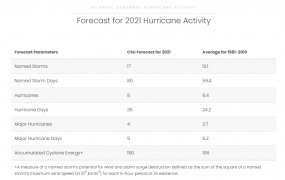 The Colorado State University Tropical Meteorology Project April forecast for the 2021 Atlantic Hurricane Season warns residents throughout the region that this year will bring above average storm activity.

This early forecast released April 8, anticipates 17 named storms, compared to the average 12. The forecast further calls for eight hurricanes, including four major hurricanes, compared to the average six hurricanes and two major hurricanes. Forecasters cited several factors as contributors to elevated storm activity, including above-average seas surface temperatures in the subtropical Atlantic paired with near-average temperatures in the tropical Atlantic. There also appears to be little to no storm-inhibiting El Nino this year.

Acting Director at the Department of Disaster Management (DDM) Mr. Jasen Penn said that the forecast should serve as a reminder to residents in the Territory to review emergency plans and begin to make preparations early for the season.

“While the Atlantic Hurricane Season does not officially begin until June 1, it is important for families and businesses to have basic preparations in place all year long as storms can occur before the season begins,” he said adding that since 2016, there has been at least one named storm before the season began, and in 2020 two named storms developed during May.

Mr. Penn went on to encourage some specific preparedness measures such as downloading the DDM app to receive weather and emergency alerts, identifying a safe space to shelter in place, and ensuring that the family has a well-stocked emergency supply kit, including items like face masks and sanitiser to help protect against COVID-19.

“We live in a region that is prone to a variety of different types of hazards, so we cannot afford to take these basic preparedness activities for granted,” Mr. Penn said.

Persons are encouraged to visit www.bviddm.com for resources like emergency plan templates, emergency kit checklists, the latest emergency shelter list, and information about tropical storms and other hazards.