REMARKS BY PREMIER AND MINISTER OF FINANCE DR. THE HONOURABLE D. ORLANDO SMITH, OBE ON THE ANNOUNCEMENT OF DIRECT FLIGHTS TO THE VIRGIN ISLANDS 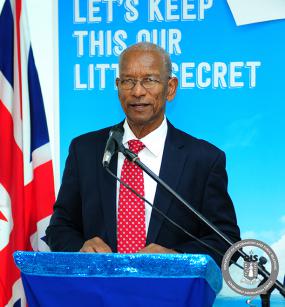 Every year for the last decade, more than 400,000 persons visited the BVI, and that number is growing.

However, a majority of those visitors are finding it increasingly difficult to get here due to the inadequacy of air access largely precipitated by the departure of American Eagle from its hub in Puerto Rico.

This is compounded by the inadequate length of the runway at the T.B. Lettsome International Airport.  We know what the result has been: A severe reduction in flights into the BVI, increasing difficulty in accessing and leaving the BVI - both for ourselves and our visitors - and high ticket prices.

Early last year I pledged to the people of this territory that within my tenure, in the next electoral cycle my government would solve the problem of air access to and from the British Virgin Islands.

While we continued to work tirelessly on the extension of the runway, I also pledged to provide for direct flights to and from the United States mainland from the T.B. Lettsome International Airport.

Direct flights between Miami and the BVI will commence in the Fall of this year. The Fall may sound a long way away, but as our partners will explain shortly there is a lot of preparation required to get those planes to fly full to and from Miami.

This is a vital and significant development in our quest for better air access to the Territory, but it is only a first step.  The second step requires that we expand the TB Lettsome International Airport runway to accommodate regular flights to and from the eastern seaboard of the United States.

While that project is going forward, we have provided for a three-year agreement with BVI Airways as an interim, workable, solution.  I would go further: today's announcement is a game changer for our economy - both in tourism and financial services

For some time now, even before the cessation of American Eagle flights to the BVI, this territory has struggled with air accessibility issues. Visitors to our shores are spending more time to get here, often having to overnight in places in which they have no interest and at times arriving without luggage which is, for them, most frustrating.

Needless to say, this is an unnecessary loss of revenue to the BVI economy and a recipe for disaster in our tourism industry.

It should concern all of us that our competitors have much better air access than we do, with direct flights to and from major international destinations.  And it certainly does not help that that sleeping giant, Cuba, has awakened from its long slumber!

Since the cessation of flights by American Eagle to the BVI, our air access problems has gotten worse: the time lost and inconvenience faced by having to take ferries or smaller feeder flights to get to the BVI have caused many visitors to choose other destinations in the Caribbean and Latin America thereby undermining our competitiveness.

These logistical dynamics have also made it very difficult to attract hotel development into the Territory and to grow our tourism product that provides a livelihood for a majority of our people and our residents.

Indeed, our ability to increase the value added component of our financial services sector has also been constrained by air access, and our newly launched Arbitration center is in jeopardy of being undermined due to the difficulties associated with getting to the BVI.

The constant demands by citizens and residents that Government continues to improve the services to the public as well as provide additional services means that we have to remain on the proverbial ‘cutting edge’ of new revenue ideas without imposing an undue burden on our people.

Notwithstanding, we must, at all reasonable cost, protect the revenue streams that we do have.  If that means continuing with the hard work we have been doing in the Financial Services Industry, then that is what we will do.

If it means extending the runway at the T.B. Lettsome International Airport, we are duty bound to do so.

And if it means positively addressing airlift, on this occasion, through a partnership with BVI Airways, then that is what we are doing.

We all know that our ability for economic development in the BVI of today is limited by our ability to participate in the global marketplace through the quick and expeditious movement of people to and from the British Virgin Islands.

Today’s signing is indicative of my Government’s resolve to do all that we can to maintain and improve our economy for the benefit of present and future generations of BVIslanders and residents.

The McKinsey report that was commissioned in 2014 by my Government to investigate the required steps that need to be taken by the BVI to remain competitive and relevant into the future was presented to the people of the Virgin Islands in 2015.

In that report air access was noted as a key and vital component to the successful future of the BVI.

I am glad that we are able today to implement yet another of those excellent recommendations.

Ladies and Gentlemen, part of our long term strategy has always been careful, responsible, inward investment into the BVI.

Our pursuit of this strategy has always highlighted the severe restrictions that quick and easy access to the Territory poses to the willingness of foreign investors to come to the BVI.

If we continue to leave the matter of air access unsolved, we will unduly and unnecessarily threaten the economic pillars upon which we depend for our survival.

It is fundamentally critical to our continued economic viably and important to our long-term economic development strategy that we overcome the issue of air access as a matter of highest priority.

Direct access for us then, means that we should be able to get to a major international hub, from which direct flights from major metropolitan centers around the world can connect to flights that fly directly to and from the British Virgin Islands.

As a result, we expect consequential infrastructural development in the tourism sector; higher participation of BVI businesses in activity outside of the BVI; and ultimately more employment opportunities for our people.

The partnership with BVI Airways is meant to fill the immediate need to solve our air access issues and constitutes another investment by my Government in the continued development of the BVI economy and its people.

Our investment in this venture will be $7M over a three year period with the expectation that this will be recouped once the venture is successful, as we fully expect it to be.

It is an investment being made with the clear understanding that without relatively easy and reliable air access to and from the British Virgin Islands now, we will struggle to provide for the travelling needs of our people, to bring our visitors to the Territory and to remain competitive in the main economic sectors, of tourism and financial services.

Think back with me to those years when our flag graced the skies of the Caribbean, from as far south as Dominica to as far north as the Dominican Republic as Air BVI, traversed to and from these locations.

Today I am proud to be a part of a venture where our flag would again ply the airways; this time as far north as the United States of America.

I want to thank Mr. Lester Hyman, Bruce Bradley and other members of the BVI Airways team for being instrumental and persistent, and for working with us assiduously to make direct air access from Miami to the BVI a reality.

Ladies and Gentlemen, we have reason to let our hearts fill with pride as we participate in this game-changing venture that will pave the way for even greater things to come in air access to the BVI.

It is my honor and distinct privilege today to present this great undertaking to you, the people of the BVI on whose behalf my Government continues its hard and tireless work.