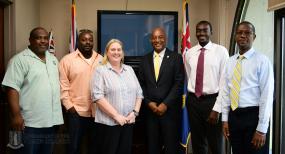 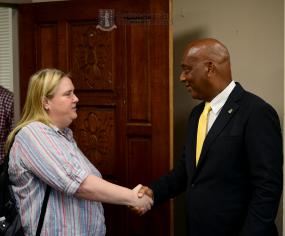 The data collected as part of the United Kingdom Government’s Conflict, Stability and Security Fund Overseas Territories Seabed Mapping Programme has been handed over to the Government of the Virgin Islands.

Hydrographic Programme Manager in the UK Hydrographic Office Ms. Kerrie Howard delivered the data collected as a result of several marine survey expeditions undertaken in 2017 and 2018.

Ms. Howard said, “This volume of data will have a significant impact in understanding the marine environment and will contribute to the overall enhancement of the blue economy in the Virgin Islands. It is great to see the enthusiasm generated by the various partners to be able to use this data and incorporate it into their work.”

Ms. Howard is also providing vital training to local officials from the departments of Survey, Town and Country Planning Department and the Environment Unit of the Ministry of Natural Resources, Labour and Immigration.

The Government of the Virgin Islands will have the necessary data under the capacity building programme to be fully informed on the Territory’s waters and its contents. The programme further aligns with the mandate to grow the marine sectors of the economy and transition the British Virgin Islands from an Economic Fishing Zone (EFZ) to an Exclusive Fishing Zone (EEZ).

The Ministry of Natural Resources and Labour continues to effectively manage the natural resources of the British Virgin Islands, and regulate the supply of labour in the Territory, ensuring that supply meets demand. These functions are carried out through the various departments and statutory bodies within the ministry’s portfolio.