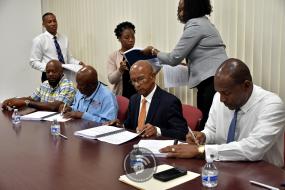 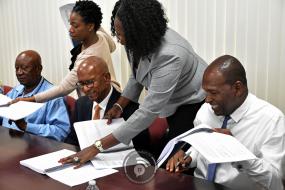 Minister for Communications and Works, Honourable Mark Vanterpool signed the contract on September 6 on behalf of the Government. He said that the contract signing shows great progress with rehabilitation works to the damage caused by Sub-Tropical Storm Otto in 2010 and the Government’s eagerness to complete the remaining projects.

Minister Vanterpool said, “This project was retendered and has now been awarded to Autland Heavy Equipment Co Limited in the amount of $1,741,000.91.”

He added, “Initially, this contract was awarded to G-Unit Construction, however, was terminated in April 2017, due to several breaches and based on this, the Government decided to invoke Clause 56 of the General Conditions of Contract (GCC).”

The Territory experienced a considerable amount of rainfall in July 2017 which caused many significant landslides and undermining of the upper and lower roadways. The project was then reexamined by the Engineering Consultants FDL Consult Inc who upgraded the drainage structures, the roadway and retaining walls which significantly altered the scope of works.