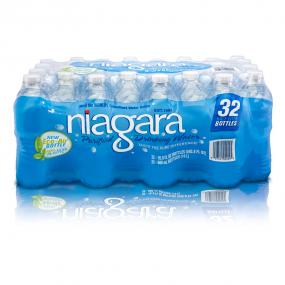 The Government of the Virgin Islands has taken swift action to safeguard consumers in light of a recall on Niagara spring water due to possible contamination of the E. Coli bacteria.

According to statements released by Niagara Bottling, a leading private-label water bottling company in the United States, the E. coli bacteria was found in one of its spring water sources on June 10, 2015.

The company wrote, “These bacteria can make you sick, and are a particular concern for people with weakened immune systems.”

Residents are therefore advised to check any Niagara water in their possession for the dates listed. To ascertain whether products they have bought are affected, reference the following information on the code found on the bottle. The code will indicate the place, date, and time that the product was produced.

The affected products have codes that begin with the letter F (for Hamburg) or A (for Allentown). The first digit after the letter indicates the number of the production line. The next two numbers indicate the day, then the month in letters, the year, and then the time, based on a 24-hour clock. For example, A610JUN15 2000 indicates that the bottle of water was produced via Allentown line 6, and manufactured on June 10, 2015, at 8:00 p.m.

Mrs. Penn stated that Environmental Health Officers are contacting retailers to ensure affected products are pulled from store shelves and have been advised that Rite Way, a major supplier, does not import Niagara water.

Persons are encouraged to contact the Environmental Health Division at telephone number 468-5110 or the Niagara telephone number 877-487-7873 or their website www.niagarawater.com with any questions they may have.

The Environmental Health Division is committed to ensuring that all aspects of the environment with the potential to negatively impact health are managed efficiently to enable all persons in the BVI to attain and maintain optimal health and social well-being.